2016 Trends of Violence and Government Take-Over

In February 2011, I posted the Fascism Rising Solar Eclipse horoscope of 1933 which you see, below. As the Campaign 2016 rallies of Republican candidate Donald Trump have forced violence into view and is being fully covered by the news media, we should note that transiting Uranus, America's totem planet of rebellion, revolt, revolution, shock, and disruption, is now in process of returning to its Mars-ruled Aries degree in the 1933 eclipse chart: 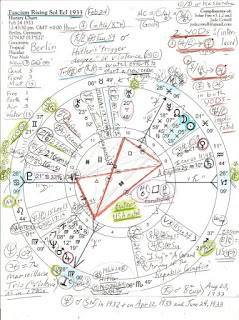 Added to the disruptive shock of the current Uranus Return (2016 to 1933) are the two interlaced YOD patterns with their turning point-crossroads-special task vibes of crisis. For more info on the Fascism Rising horoscope, here is my original post. You will note other current transits to the planets of 1933 and, of course, the recurring Uranus-Pluto square (Aries square Cancer in 1933) of a titanic generational clash as we've been experiencing again in this, the New Millennium, but with Pluto in Capricorn (signature of 'the dictator'). It seems to me that megalomaniac Trump's rhetoric triggers the violent Marseillaise Mars-Jupiter-Neptune trio to march again to the Bastille with fists and elbows ready to strike all who disagree.

Now as you know, Uranus in Aries is the blind zealot and fanatic anarchist (Ebertin) and along comes candidate Trump born under Mars Rising with kingmaker star Regulus in tow--in egoistic Leo. Mr. Trump has made himself a willing vessel for violent Mars-Uranus energies that seek expression in our era for we know that fascist authoritarian elements in the Collective never disappear completely, they simply cower in darkness in preparation for another government take-over attempt as they re-arm to fight another day.