As you've heard by now Former Obama official Susan Rice unmasked Trump officials who met with UAE government officials during the Trump transition period. The UAE did not follow protocol and inform the Obama administration of the visit, hence the 'unmasking'. The Trump officials who secretively met with the UAE reps include Jared Kushner, Steve Bannon, and Michael Flynn and it is reported that the meeting involved the setting up of a secret communications channel between Trump and the Russian government.

Apparently, Mr. Trump wants more of Russia and Mr. Putin than he can honestly get. Yet if a shady communications channel with Russia and Trump was set up, how long did Mr. Trump and his gang think it could go undetected? 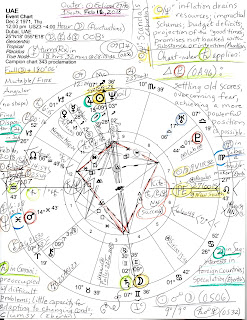 Around the chart and conjunct the UAE's Ascendant @27AQ43 is notated the February 16, 2018 partial Solar Eclipse in the 1 South Saros Series with themes of: flooded with ideas and options which are enthusiastically expressed; an element of haste is attached but outcomes are potentially positive (paraphrasing Predictive Astrology, Brady). Note that the February 2018 1 South Eclipse opposes the UAE's Prenatal Solar Eclipse, aka, PE (conjunct natal Descendant @27Leo15 in the 9 New South Saros Series; themes: bringing to the surface long-term worries about loved ones, health, or issues concerning paperwork or communications; responsibilities with paperwork may 'come home to roost' and any news has a sense of destiny or fate attached (Brady). So the February 2018 eclipse may possibly activate or provide illumination of the UAE's PE issues and concerns and combine them with 1 South themes in some way.

And with the February 2018 eclipse personalized for the UAE (conjunct natal DESC) we may expect the UAE federation to remain in US news headlines well into 2018.

If you've avoided it so far (and I can't blame you!), you may wish to view the horoscope of the Solar Return 2017 of Donald Trump. Your Comments and/or your Shares are always appreciated!