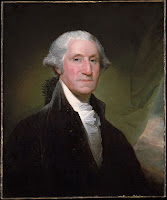 Have you ever visited the George Washington Masonic Memorial in Alexandria, Virginia? Its basic design or shape is 'obelisk' and it is intended to evoke the famous Lighthouse at Alexandria Egypt, a factoid that ties right in with the Freemasonry so revered by General Washington, Master of Alexandria Lodge #22. As you know, the Lighthouse at Alexandria is one of The Seven Wonders of the World. Such symbols hint of the possible involvement of other secret societies though those of today may be newly invented or are offshoots of older organizations. As we all have noticed, whatever virtuous character these networks think they possess they may not and most Americans realize this when considering how America's Ship of State has been helmed through the years--in misguided, perverted directions, no longer under the inspiration of America's original founding principles.

And as Thomas Jefferson said of George Washington, "The moderation and virtue of a single character probably prevented this revolution from being closed, as most others have been, by a subversion of the liberty it was intended to establish."

Admirable! And yet the power-grabbing egomaniacs in the White House and frequenting its environs today have no intention of following the George Washington model of leadership, or of heeding his warning for the future. With perverted consciences, they pursue ravenously all they desire while the sabotage of our country goes flagrantly on, our freedoms unjustly looted away. Thinking the American People divided beyond repair, their brazenness increases and yet a reckoning is coming. How long will biological and philosophical descendants of the American Revolution allow the dismantling of our nation before stopping in its tracks the sabotage by the infiltrators?

Here's George Washington in Masonic apron now leading the Masonic ceremony that laid the Capitol Building cornerstone (or, possibly the first foundation stone instead because he's standing in a trench) on September 18, 1793 with transit Saturn conjunct Washington's natal Ascendant (18Tau28 = '19Taurus': "A New Continent Rising Out of the Ocean") and Washington's natal Uranus @10Sag03 rising ('11Sag': "In the Left Section Of An Archaic Temple, A Lamp Burns in A Container Shaped Like a Human Body") a few minutes 'after mid-day':

For more astro-notes on George Washington and his era check out these related posts:

The Presidencies of Washington and Trump = Uranus!;

History of Freemasonry and the Skull & Bones (video);

The Solar Eclipses of Valley Forge 1777;

The Stars Over Washington DC.

*Timing of this ceremony from The Secret Architecture of Our Nation's Capital by David Ovason.