The Sabotage of America Ongoing

If need be, NPR shares some background info on 'gun-rights activist' Maria Butina, a Sun Scorpio born on November 10, 1988 in Barnaul, Siberia. Reportedly, her Russian agent activities have been ongoing in the US since 2014 when she began encouraging guns-rights demonstrations. A mild activity when compared to her more recent ties to US politicians and officials, plus, there's her work for or with the National Rifle Association (NRA)--and all seem to be compromised by the Kremlin now.

Word is, Ms. Butina has changed her plea to 'guilty' and agreed to cooperate with the Mueller investigation. Unless otherwise is announced, her hearing is set for tomorrow, December 12, 2018, starting at 3:15 pm, on Capitol Hill. Here's the horoscope of that date, hour, and location: 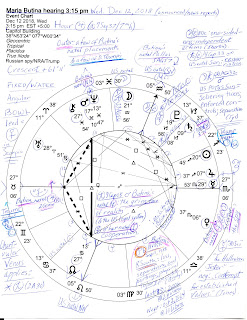 Some of Maria Butina's natal placements are marked in and around the chart (highlighted in lavender pink), a few of Donald Trump's are added (highlighted in blue), and some of America's natal placements, too, such as US natal South Node, the 'tail of the dragon' conjunct the 3:15 pm est Midheaven (5AQ50) and the transiting South Node now 'swiping' across US natal Pluto (27Cap33). And that would be the same Pluto that was spotlighted at the RNC 2016 by a Full Moon Conjunct US natal Pluto: Russian Encounters when Vladimir Putin had the Republican platform changed more to his liking.

And if you view the RNC 2016 Full Moon chart, you'll see that the current position of the North Node of destiny points toward the Full Moon's Sun (the leader). Interestingly, a Sun-NN connection in Politics can lead to 'political associations which eventually do more harm than good, formation of ties to allies drain vitality, and/or a loss of respect due to unfortunate mergers or alliances' (Munkasey's Midpoints: Unleashing the Power of the Planets). Well, yes.

Besides a few midpoint pictures you see listed, notable in tomorrow's chart is that 3:15 pm falls within a Jupiter Hour and Butina's natal Jupiter Rx @2Gem+ is her first natal planet to rise in this horoscope suggesting Jupiterian themes on the menu such as finances and politics. Boundaries have been broken! Donald Trump's first natal planet to rise is his chaos-loving Uranus (@17Gem+ in his natal 10th house of Career and Public Status) which forms his nibs' quirky and very visible trio along with his North Node and Sun; plus, his natal Sun conjuncts the 2nd cusp (22Gem23) of this chart--along with US natal Mars. Has the money been followed? Of course!

Listed in the 5th house of the chart and highlighted in orange is Maria Butina's Prenatal Solar Eclipse @18Vir40 ('PE') which manifested prior to her birth on September 11, 1988 in the 8 South Saros Series. Themes of 8 South are 'loss, separation, sad partings, and possible physical injury' (paraphrasing Brady's Predictive Astrology). An 8 South eclipse last occurred in 2006 @29Virgo; next 8 South: 2024 @10Libra.

And in the 6th house of Military, Police, and Civil Service appear her natal Scorpio line-up of Mercury, Pluto, Sun, and Moon. Transit Venus now conjoins her natal Mercury, planet of communications, deals, and pleas and suggests her decision to cooperate with investigators though it remains to be seen if her information will be reliable for with so much Scorpio within, perhaps we can say that Ms. Butina was born to betray, spy, and sabotage.