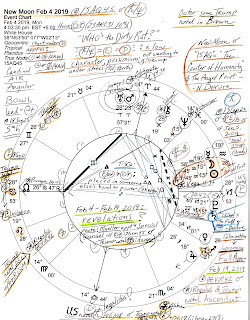 Now as you see, transit Saturn (highlighted in blue, 6th house) @15Cap22 conjoins the Prenatal Solar Eclipse ('PE') prior to this New Moon, an eclipse which perfected on the evening of January 5, 2019 and will forever be imprinted upon the opening of the 116th Congress with its theme of 'joining a new or unusual group and gaining a great deal' (paraphrasing Brady's Predictive Astrology). Our newly elected House representatives of the Democratic persuasion certainly did that!

Below right is the February 19, 2019 Full Moon conjunct Regulus horoscope which shows asteroid Nemesis rising ('the unbeatable foe' or, 'divine retribution') in Gemini along with gold-hoarding Midas. The Full Moon falls across the Virgo-Pisces victim-savior axis and squares fixed star Alcyone ('something to cry about'). Follow the link for my original post which was composed prior to the brutal Trump Shutdown which began at midnight on December 22, 2018 so I'm thinking the cosmic picture here refers to the suffering of the American people and Trump's sabotage of the US economy using as an excuse his vanity project 'the wall' that he and Republicans could have funded and built during the two years they had control of House and Senate. The timing of the Trump Shutdown leveled extreme stress upon federal workers coming just before Christmas, and I believe that Trump was encouraged to time it to prevent much of the 116th Congress/Nancy Pelosi as Speaker of the House publicity from taking over the airwaves. Plus, Trump wanted a 'showdown' with Speaker Pelosi and to present her with a crisis to deal with instead of the progressive agenda (he hoped)--why else wait for her swearing in as Speaker? Of course, Sean Hannity of Fox News and the other Murdoch shills advised him of this necessity and as you know, power-grabber Trump hates it when someone or an event takes away what he considers 'his' spotlight. Alcyone's tears of affected federal workers and others with no paychecks with which to feed their children are of no consideration for we know what Trump has already done to children.

Yet predictably, if Big T can figure out how to end his Shutdown without too much humiliation, he'll attempt to claim the 'savior' side of the Virgo-Pisces axis! That's unless 25% of the US government inactive is the permanent condition the GOP has longed for all these years. If so, 25% may be just the start with full collapse their ultimate goal (and Putin's).

So please enlarge the images for more chart details for relief may be in sight because the expected revelations from the Mueller investigation are apparently part of the lunations' revealing and uncovering functions in February which will lead into the March 2019 Lunations of Crisis for New and Full Moons can uncover inconvenient facts and secrets much as Solar and Lunar Eclipses do in their disruptive Uranian 'wild card' sort of way. And often it takes a crisis to lead ultimately to improvement! 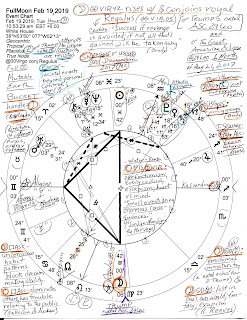