January 10, 2019: Today as the Trump Wall stalemate as 'justification' for the bogus, harmful Trump Shutdown continues, news that the Mueller investigation nears its end comes as potential if partial relief to the current level of tension and frustration in America. It is reported that Special Counsel Robert Mueller will begin downsizing his staff soon and that acting AG Rod Rosenstein is preparing to step down from the DOJ, timed by William Barr's assumption of the AG post once his confirmation hearing, apparently scheduled for next week (possibly Tuesday January 15th), wraps up successfully. Then it will probably take several weeks more for Mueller's staff to prepare then present the report which may or not be 'hidden' by Trump supporters in the Department of Justice.

Not all my notes are mentioned in this text so please enlarge the image for more details: 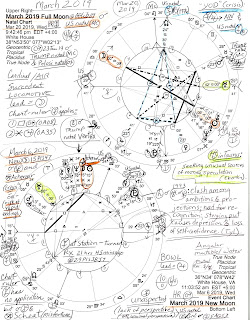 Politically, it seems that the returning Mr. Barr is a shoo-in for the AG post circa 2019 but meanwhile, the fate of the Mueller report is uncertain due to 'Bill' Barr's pre-judgment of the Trump investigation's legality and the iffiness of the timing of Mr. Rosenstein's departure while still managing to protect the investigation against assaults by the guilty-acting Mr. Trump. This week we find that Robert Mueller's report may possibly 'drop' in March 2019 if not in February, so above are the DC Horoscopes of the March 6th New Moon @15Pis47 (conjunct difficult Achernar star of 'crisis' and/or'rapid endings') and deceptive, delusional Neptune (16Pis08), planet of mass media, the masses, lies, fraud, propaganda, bubbles, contagion, fear, paranoia---all in the 10th house of Career and Public Standing when the chart is set for the White House (same for Washington DC). As you see, Mercury is at Station and has turned retrograde which suggests review, reconsideration, or perhaps someone changing their mind about their plans (edit: or a 're-port'?). Sorry to say but Mercury conjoins another difficult star, too--Scheat, a star of misfortune.

Now as you know, a New Moon phase represents a 'seeding' of a new cycle of activity yet this one is clouded by veiling, disguising Neptune, just recently moved beyond its 5th conjunction of 5 (Dec 29, 2018) in the Republican Party's first-ever Neptune Return (14Pis01) Horoscope. Visions of Republicans obscuring Trump's antics and illegalities come to mind although a few GOPers have ventured from behind the curtain and jumped the sinking ship. Perhaps more will stand up and follow suit by March, no matter what secrets Trump, Putin, and/or others hold over them. Yes, I want to believe that not all Republicans are compromised, don't you?!

Then upper right, you see the culminating Full Moon of March 20, 2019 @00Lib09 which perfects a day prior to Spring Equinox 2019 and shows testy Mars @23Taurus conjunct Trump's natal MC and simultaneously nearing the natal Mars of Speaker Nancy Pelosi where raging star Algol blinks. This Full Moon @00Libra, a Cardinal World Point of Manifestation, conjoins the natal Midheaven ('MC' = The Goal; Aspirations) of the United States of America (July 4, 1776 5:09 pm LMT, Philly) so that a cosmic picture of timing and fulfillment is shown by the bright rays of the March 2019 Full Moon yet as I type at you in January, your guess is as good as mine, if not better, as to what Trump and Washington politicians have in mind--assuming that they have a definite plan for our nation at all--other than chaos as they shove our nation toward a constitutional crisis via authoritarian dictator-wanna-be Trump's extreme efforts to unduly expand executive power by ignoring the principles and requirements of the US Constitution.