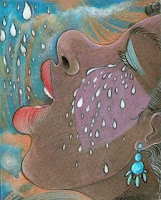 February 5, 2019: Tonight at 9:00 pm est the 2019 State of the Union address is scheduled after a week's delay due to the Trump Shutdown and Speaker Nancy Pelosi's insistence that 'no SOTU in the House chamber until the government is re-opened'. So Trump cooled his SOTU heels, bone spurs and all, and tonight's the night.

With my astrology software in mothballs due to a recent computer crash, no SOTU 2019 horoscope is possible for this post so here's a bit on the curious fact that at 9:01 pm tonight, the Moon enters Pisces just as the propagandist is set to begin his speech and hours after the February 4th New Moon @15AQ45 has passed. Naturally the sign of the Moon signifies the mood of the public and in sensitive, watery Pisces, Trump may find that the number of folks who show up to witness his diatribe in real time is rather low.

Actually, the Democrats' SOTU rebuttal just after, to be delivered by Georgia's Stacey Abrams, promises to be the more interesting of the two speeches especially since the rhetoric of Trump the Uranian has become quite predictable like a scratchy old record played many times too often. "National emergency at the border!!," cries the wolf once again, this time with the megaphone of the bully pulpit in hand. Do you believe?

A flavor of the evening may be seen by its Sun Aquarius-Moon Pisces blend with the detached, futuristic Aquarian played by Trump and, on one level, the softer more compassionate Piscean played by Stacey Abrams. From the misty, unsubstantial Air-Water combo itself, we may expect Trump to reach out to the public and his 'backers' with the expectancy of having his fragile ego boosted by their positive responses, his 'independent thinking' on display for the world to see and marvel at. His 'mark on the world' just has to be a 'Trump Wall' for he's determined although yours truly continues to wonder if 5.7 billion dollars is the amount of some loan payment Trump has due and he'd prefer to keep all his fingers if you know what I mean. Why won't someone offer him a statue to his 'honor' instead? The pigeons would appreciate it!

Anyway, tonight's address promises a mixture of mind (AQ) and heart (Pisces) although impracticality and Trump's usual evasiveness will be evident as well. His apparent idealism may shine through but so will his tendencies toward gullibility and skimming the surface of things and childishly assuming that he's an expert on any topic you can name. How much 'sway' his words can conjure is unlikely to break any records and an uptick in Trump's approval ratings after tonight's performance may be as elusive a prey as 'The Wall' Nancy says he can't have billions for. A Normandy wall (fence) with upgraded tech surveillance equipment and more manpower and judges on the border, probably. But no bottomless money pit for a 'Wall' as Speaker Pelosi's Aries Jupiter continues going up against Trump's Libran Jupiter...in the background a role reversal Mars vs Venus conflict!

A sensitive soul with a grandiose imagination, Mr. Trump will likely escape for the comfort of his private cocoon once he's done making his case tonight, all hamberders beware! And which mysterious advisers will he phone into the wee hours, hoping for positive encouragement? Drifting off-subject is a distinct possibility with Sun AQ-Moon Pisces, something off-teleprompter Trump tends toward so we'll watch for that if we watch at all.

Now Trump's SOTU 2019 may not qualify as "grand opera" but perhaps it's telling that tonight's cosmic vibes of Aquarius and Pisces are shared natally by two famous film producers, King Vidor and Roger Vadim and will be delivered by circus barker and reality TV 'star' Donald Trump in the leading role of America's current POTUS in the February 5th performance of Washington DC's Political Theater of the Absurd.

Appearing in this post: Sun Sign-Moon Sign by Charles and Suzi Harvey; above image, The Orator, a pencil drawing by yours truly.

Thank you. I so look forward to all of your posts.
D Yuna