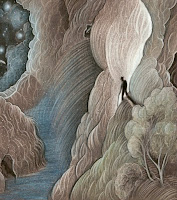 April 12, 2019: As you've heard, Jupiter-Neptune figure, Julian Assange of WikiLeaks fame, was arrested yesterday morning in London UK and was unwillingly extracted from the Ecuadorian embassy and pushed into a police van--one day after transit Jupiter turned retrograde opposite his natal Venus in Gemini! This transit indicates a period when cooperation from others is hard to attain, promises can be broken, and discouragement sets in. Other cosmic factors stand out for him now including transit Pluto @22Capricorn opposing his natal Mercury in Cancer denoting such potentials as receipt of disturbing news from the outside world (that the embassy had revoked his residency there that morning, April 10), the arrival of a major crisis causing irritability and distress, and the opinions of others being forced upon him (indictment). Note that his natal Mercury @24Cancer conjoins the natal Mercury (Rx) of the United States of America (1776).

Yet curiously, transit Mercury, planet of communications, hacking, and passwords, trines his natal Mercury indicating a time of many calls, talks, negotiations, agreements, and the need to make connections and to exchange something. Stress, anxiety, and nervousness are shown by multiple factors such as transit Mercury sesquisquare natal Moon (Luna @7Sco42 in natal 12th house of Secrets and Karma), tr Mars inconjunct natal Moon, and tr Jupiter inconjunct natal Mercury--all Mercurial and related to communications, thought processes, ideas, and plans which now for Mr. Assange have gone awry.

Looking ahead, Julian Assange's natal Sun @10Can38 will be directly 'eclipsed' on July 2, 2019 by a Solar Eclipse @10Can37 in the difficult 3 North Saros Series with themes of: 'news involving young people or news that transforms a situation and can cause worry or obsession; very large plans are wanted but avoid getting carried away'. (Brady's Predictive Astrology). Perhaps you recognize 3 North as the Prenatal Eclipse ('PE') of the 9/11/01 WTC attacks, the 1929 Crash, the CIA, and President Andrew Jackson. Or not. Even so, this cosmic solar condition suggests a total change of direction for Mr. Assange who must already be feeling its 'wild card' 'cosmic blink' eclipse energies--so was this challenge fated? One might guess so for he was born July 3, 1971 (3:00 pm AEST Townsville, AU) during a karma-laden Saturn-Neptune opposition.

A natal Saturn-Neptune opposition suggests one who "swims with leaden boots" in his life while trying to float along without paying his dues which are always (at some point) demanded. This opposition can also indicate one with criminal tendencies (which is not meant to cast aspersions upon his dire or trumped-up legal situation). His test now may be intended to inspire him to become more responsible concerning his interactions with society; otherwise he'll be forced to do so by legal actions against him and their limiting consequences.

Above image: my drawing, Chiron Leaves His Cave. Descriptive of Assange's arrest?

Beautiful drawing! luminous and ethereal lanscapes, while Chiron walks on two legs like the rest of us-did his wish come true?

Thanks so much Tricia Keith! Perhaps Chiron's wish is possible with a cane to steady him! jc

And Sula Britt thanks for the link. She is an amazing astrologer I know because we're FB friends! jc