Are you in a celebratory mood this year in spite of Trump towering over Washington DC and interfering with our July 4th traditions? First, you may wish to check out 14 Fantastic Facts about the Fourth of July by David Roos just to capture the flavor of the day which promises to sport the Baby Trump balloon floating over the city!

And as most Americans know, the Declaration of Independence, dated July 4, 1776, was first read aloud publicly in Philadelphia's Independence Square on July 8, 1776. The next year, despite the ongoing American Revolution, John Adams called for "bonfires and illuminations" to celebrate our first Independence Day 1777. And if we check out the cosmic weather on that day in July 1777 we find a 14 North Solar Eclipse @13Can10--conjunct the US natal Sun of July 4, 1776. A solar eclipse 'eclipsing' a natal Sun can denote a change of direction in a positive or negative way, a cosmic spotlight cast upon America's leader/s, a few moments of openness to the eternal realms, plus, a chance for karmic progress to be made if events brought by the eclipse are handled correctly. In Moon-ruled Cancer, sign of the homeland, patriotism, and self-protective urges, an eclipse suggests potentials for emotional extremes and attachments, spiritual attunement to situations, and karmic family ties particularly of the maternal persuasion (R. Lineman).

That such things expressed during those trying times under the influence of the 14 North eclipse I have no doubt and they would be personalized for our leaders (1776 Sun). Additionally, an eclipse in Cancer also relates to genealogical research and with transit Mars on July 1, 2019 @29Cancer+, this degree's Sabian Symbol was activated: "30 Cancer" = "A Daughter of the American Revolution" (guilty as charged!). Well, since 1777 our July 4th celebrations are intended to stir the American Spirit within us, right? (the D.A.R. publishes a magazine!) That is, for those who possess such a spirit as certain 'leaders' nowadays do not. In fact one such personage plans to make July 4th 2019 all about his huge ego with new 'Sherman tanks' that haven't been produced in years (will he hallucinate them?) and a pompous military display marching down Pennsylvania Avenue to mass disapproval! Why, it smacks of martial law in DC, my former city of residence, and is completely unacceptable! Not to mention a wasteful extravagance.

Okay, I'll hush for now about empty displays of US might staged by a superficial man desperate to be taken seriously by the world and mention that July 1777 held both a Solar and Lunar Eclipse as does July 2019 - and all four eclipses fall across the Cancer-Capricorn axis. This in a sense creates a sort of cosmic time link between 1777 and 2019 and considering current Washington antics, plus, the dystopian future most people fear is being implemented, one may wonder if July 2019 will in retrospect be a book-end of our national independence. Hopefully not, and of course you may disagree, but there it is.

And so, for your consideration, the following dual horoscopes represent the Total Solar Eclipse (which actually perfected on) July 5 1777 at 7:23:45 pm LMT Philadelphia with 12Cap28 rising and 6Sco35 at Midheaven, and the Lunar Eclipse of July 20, 1777 @27Cap59 conjunct eclipse Pluto Rx (28Cap57) and US natal Pluto Rx (27Cap32) (a cosmic foreshadowing of the RNC 2016 Full Moon conjunct US natal Pluto). Follow the link, above, to view the July 2019 eclipse horoscopes set for DC. Below, some basic chart notes are messily penned on if you'd care to enlarge the image; eclipse themes for the difficult 14 North series are added here as well: 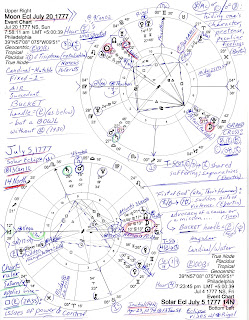 14 North Themes: 'a peculiar turn of events; an acute time of confusion in personal relationships; unexpected happenings in financial matters; possible illness; draining of energy; despair; no important decisions should be made as there is to much confusion and possible delusion to make clear judgments' (Predictive Astrology, B. Brady).

The last 14 North Solar Eclipse manifested on November 25, 2011 @2Sag37 as the Sequestration Eclipse and at least some sequestration provisions remain in force in 2019. Plus, the 2011 14N eclipse was re-activated by the May 21, 2016 Full Moon @1Sag36, a lunation that yokes us to Campaign 2016 issues (with 'sequestration' said to have been a buzzword for 2016 Republican candidates who were lost for words on the topic!) and the continuing travesty, tragedy, and drama that is Donald J. Trump, our pompous-a**-in-chief.

Yet as noted above, a spark of merriment promises to heighten our annual Independence Day celebration on Thursday, made dreary by his nibs, for the 'Baby Trump' balloon will crash Trump's Fourth of July Party as part of Code Pink's 'Trump is a Big Baby Festival'! Now independently speaking, that's what I call something to celebrate!!

Celebrating the fourth is the last thing on my mind. America keeps repeating the same drama over and over-- brutalizing, and mistreating POC children.
Thanks for the update.

I am blown away by America's failure to recognize that it keeps abusing mistreating and criminalizing children of color. And you wonder why there's a disconnect throughout the country.

Thanks for helping me stay focus and sane.

Agreement here Linda thanks for your comments. Any American with a conscience cannot possibly celebrate with the same spirit as we would prefer and sadly, it's a familiar feeling during the last decades more often than not. My Pisces Moon is in the cages and Trump has turned the key. Who gives him such power to do so? jc