A Brief Peek at RNC 2016 Through an Astrological Lens

Assuming that the Republican National Convention of 2016 is held as planned from July 18--21 in Cleveland, Ohio, here is the horoscope of the Full Moon that will perfect on July 19 at 6:56:32 pm EDT in that city, during that political convention and noting that Full Moons can affect events in unexpected ways as significantly as 'wild card' eclipses: 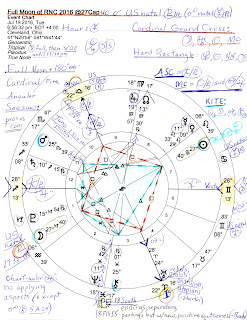 As you see the Hour is Mercurial and chart-ruler Jupiter @19Vir57 is in his own 9th house of Ideology, Philosophy, and Foreign Affairs but makes no major applying aspects to other planets--unless you wish to count an opposition to Chiron @25Pis01 Rx in the 3rd house of Communications. Chiron in Pisces represents mentors and gurus so perhaps this is significant considering how bought off most politicians are. And expansive Jupiter is a quite corporatist himself (as as Republicans) and can signify several other roles in society such as politician, banker, religious leader, broadcaster, and/or The General.

And when in Mercury-ruled Virgo, Jupiter is an excessively ambitious organizer who doesn't mind using superficial criticism to get his point across. He can possess moral values and follow ethics but materialism may take the lead. This Jupiter is no longer the lead planet in a Locomotive pattern of the high-powered executive, by the way, for this chart has the shape of a Seesaw indicating a weighing of pros vs cons approach of constant conflict which supports the possibility recently touted that the Republican Party may end up with a brokered convention (first time since 1976); (edit: it didn't). Reporters are giddy over the prospect as I type (12.13.16) and this is said to be due to...you guessed it...the popularity of Donald Trump, the guy the power elite would like to jettison from consideration, thank you very much. At least, that's the line being sold by pundits these days. Of course, Mr. Trump may not be a political candidate by July 2016 so don't fuss at me if his candidacy is moot by then! (edit: he wasn't moot and was selected to play president in order to undermine the institution and milk the cash cow dry).

So if we look at the chart (enlarge to read my notes if you wish) we find planetary patterns of interest. In turquoise (or aqua) I have marked a KITE pattern which includes the Moon and Sun, activist Mars @25Sco39 in 11th house of Groups, and Chiron already noted in 3rd house. KITEs suggest success ('high-flying') yet for that Chiron might be better replaced by a planet (you'll want to refer to other astrologers who have more recent info on Chiron, the Wounded Healer, than what I have.) All I can say is that a mentor or mentors (edit: or a Russian leader?) are aiding the GOP with their high-flying White House ambitions, financially and otherwise. Successful teamwork is denoted by Mars (ASC-MC = Mars) and of course, there's the culminating Full Moon @27Cap40 conjunct US natal Pluto (27Cap33 Rx) denoting fulfillment but also endings of relationships (see chart for themes of the PE in the 18 South Saros Series.) I usually take Pluto to represent hidden manipulators and puppet masters of the secret society persuasion but natal Pluto at can on one level, also stand for the Pentagon ('28Cap' = "A Large Aviary"). With US natal Uranus and Mars in the 6th house of Military and Police Service, a Pentagon influence on the nomination seems even more likely.

Another prominent planetary pattern (highlighted in orange) is a Cardinal Grand Cross--but only if we allow the Midheaven (MC) as the 4th point. In a case like a political convention I prefer to use the MC as the outlet for expression of the energies of the Full Moon which squares Uranus at IC and listed on the chart you see my paraphrase of Ebertin's description of Uranus in Aries: rebels, zealots, anarchists, Utopians which I have taken to mean (since 2010--transit Uranus to Aries Point = US natal IC) the tea party contrarians and anti-government shutdown artists who have infiltrated the US Congress such as the hammy Mr. Cruz. Of course, Mr. Trump may be part of the anarchy, too, given the way he has so far shaken things up--but this is significant only if he's still in the game by convention time.

So as you can tell, I'm reading the Full Moon horoscope as a representative of Republican National Convention 2016--can you blame me? The Democrats don't get a Full Moon for their 2016 convention (July 25- 28, Philadelphia, PA), only a 4th quarter Moon, the 'crisis in consciousness' phase. We'll have to discuss more about the DNC 2016 later on but for now, why not marvel at the GOP Full Moon conjunct US natal Pluto which is perhaps a signal for terrorist events that Republicans will tactically propagandize across their echo chambers in an attempt to frighten US voters into putting alleged safety over best interests by voting Republican in spite of the anti-government ideals they represent. In Campaign 2016 the Rs can't divulge what policies they really have in mind or no American would vote for them--ever!

Actually, the terror-touting has already begun since the Paris and San Bernadino attacks of 2015 and the tactic (which got them elected before) is paying off for the GOP in higher poll numbers if you can believe mainstream media reporting. I don't. But you can if you really want to. This is 'free' America after all.

Well, Mr. Trump not only remains in the race, he continues to lead in various polls. Now it's Senator Ted Cruz that establishment Republicans are anxious to jettison--he, whom everyone dislikes, the flame thrower who'd like to burn Washington DC down to the ground and start over according to know-it-all Senator Green Eggs' theocratic specifications. It's tricky because both Trump and Cruz are pied pipers with plenty of supporters in the audience if not in the voting booth. But soon (Feb 1) the first primary will separate Republican candidates into plausible and implausible on a day that the Moon goes void-of-course at 7:35 pm (est) so the name of the victor will be 'baked into the cake', as political pundits like to say, before all the ballots are counted (which may take all night). Yes, Trump has an edge yet John Kasich is looking stronger as an establishment candidate and town hall audience pleaser. Can Kasich go national? His Sun Taurus-Moon Capricorn has the pragmatism and practicality needed to run corporate America but perhaps a lack of a connection to US natal Moon in Aquarius is missing unless we count his Pluto @19Leo opposing visionary Aquarius.

Still, it's curious that Kasich announced his nomination bid on July 21, 2015 with Mercury, planet of announcements, messages, plans, and deals, @26Cancer...conjunct US natal Mercury Rx, and his natal Uranus @11Cancer falls within the midst of America's Venus-Jupiter-Sun line-up. It will surprise me if these links are enough to pull off a victory for John Kasich unless the power elite who select our presidents decide he's their best bet for following the global government script.