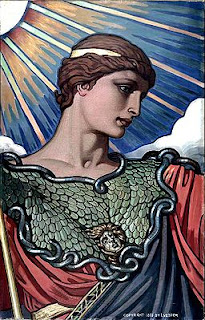 On September 24, 1789, George Washington signed the Judiciary Act in order to set up the US Supreme Court, aka, SCOTUS. The Court's first session was held in New York City on February 1, 1790 with John Jay presiding as Chief Justice, plus, associate justices John Rutledge, William Cushing, John Blair, Robert Harrison, and James Wilson (6 in total). SCOTUS was established as the ultimate arbiter of the laws of the United States particularly those dealing with constitutionality and we find the institution of the Supreme Court ensconced and empowered within Article 3 of the US Constitution.

Below is a dual-chart image of both September 24, 1789 (lower left) and SCOTUS' first-session February 1, 1790 (upper right). Highlighted in green on both horoscopes are heavy-weights Saturn 'the judge' and Pluto 'the power behind the throne' (possibly the Pope!). Both timings are speculative--1789 is set for noon LMT and 1790 is set for 9:00 am LMT; both are located in New York City (as they should be based on historical events) and a few asteroids and midpoints are sprinkled around the charts. 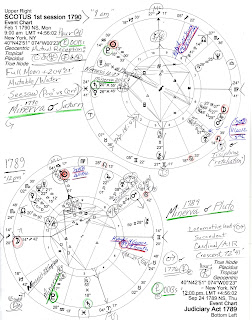 Significant is that in the 1789 chart, asteroid Minerva conjoins Pluto Rx @17AQ07 (with planet Pluto undiscovered until 1930 and, in both charts, out-of-bounds of the earthly plane). Therefore, Pluto, planet of psychology and hidden control (among other things) operates unconsciously, if at all, upon people and events of the era but certainly in a behind-the-scenes or invisible capacity. Perhaps Pluto's relationship as the higher octave planet of astrological Mars sneaks into play and in the 1789 chart, Mars @24Can32 not only leads a Locomotive shape of planets denoting a high-powered executive determined on success (George W., I think), but Mars also conjoins US natal Mercury Rx (July 4, 1776) which denotes a time when ideas become reality, thinking is energized and enthusiastic, and activities are vigorously undertaken. However, challenges may be encountered and impatience and/or disagreements may temporarily interfere with carefully planned endeavors, plus, political activities and opinions are indicated by Mercury-Mars contacts.

Clues to Minerva's influence in September 1789 are shown by Pluto's sign and condition. In Aquarius, Pluto signifies a strong communal sense, a wealth of plans, and an urge to reform; life advancement comes with the help of other people (Ebertin). Since the timing of both charts is speculative let's leave out Pluto's 2nd-house position and emphasize Pluto's condition as shown by aspects from other planets to Pluto: a sextile from the Sag Moon was within orb for the afternoon suggesting an ability to 'unclutter' issues; Sun sesqui-square Pluto is a complex aspect which implies a square-within-square relationship identifying leadership ambitious for power and a strong will imposed upon others; Mercury trine Pluto suggests an ability to get at the root of issues and good powers of concentration; Jupiter opposite Pluto provides ambition, an urge to acquire wealth and power, a tendency toward dogmatism, and an autocratic attitude that feels it must reform the morality and standards of others. All rise!

Of course, the Neptune-Pluto trine, active during both years and beyond, is generational and identifies a period when mysticism, the occult, clairvoyance, and strong intuition featured for those in tune with such energies but considering our topic, let's say that the trine relates to reformers who work for improved societal conditions and gain the power and social positions to do so. You know--like Supreme Court justices do.

Then in the 1790 chart, Minerva conjoins lawmaker and judge Saturn in Pisces, a modest, reserved placement for the taskmaster planet whose hard, concentrated work in seclusion is somber, serious, and may never receive much if any recognition. (This applies to law clerks as well). A struggle with opponents is also indicated by Saturn in Pisces (Ebertin) and the planet's rising position with Minerva is significant if 9:00 am happens to be the hour, or near the hour, that the first court session opened. Obviously, answers and solutions within the biggest picture were on the institution's Saturnian agenda that day and this remains the case.

Now let's take a look at Saturn's condition in the 1790 chart via planetary aspects: with the Moon square Saturn aspect within orb, we find austere attitudes and support for the above 'somber work in seclusion' indication; Venus sesqui-square Saturn denotes stiff formalities and ceremonial events (probably done with Masonic flair behind closed doors--many of the Founders and their contemporaries were a bunch of goddess worshipers, you know--see goddess Columbia's statue atop the Capitol Building, for one example!); Mars trine Saturn provides ambition, an authoritative mindset, capabilities for shouldering heavy responsibilities, taking purposeful actions, working hard and long, and acting shrewdly when it comes to politics.

Finally, a Saturn-North Node trine suggests careful, conservative justices who followed the moral, social, and business codes of their day--and the trine favors conservative politicians and our first justices who studied the issues before them without favor and delivered well-considered, fair decisions.

Well, congratulations to both readers of this post who managed to get this far as I'm certain few will! In closing I'll add that we might wish to say that knowledgeable Minerva on her path from September 1789 to February 1790 may be said to have "translated light" in a symbolic sense and carried her rays from Pluto to Saturn, and to me this says that the Supreme Court of Saturnian justices was intended to act as a beacon of Minerva's brilliance on behalf of The People of the United States of America. That SCOTUS is now corrupted by two illegitimate justices and the lax morality of the current White House administration marks yet another tragic turn in America's destiny and sullies all SCOTUS decisions forward unless and until Supreme Court integrity is reestablished.

Thanks for the behind the scene look at how our country was formed and the BS it is today. It's a wild ride.

You're very welcome Linda and I know what you mean! Jude

Why would you think no one would read your post to the end? If someone's interested in your work, they're going to read it! Anyway, speaking of asteroids, do you read Alex Miller's Asteroid Astrology blog? It's uncanny how the asteroids tell the story. http://alexasteroidastrology.com/astrology-of-impeachment-hearings/

Thanks a bunch Martha it's good to know that my fusses are read by someone like you!! Yes I read Alex Miller's work when time permits. His asteroid work is almost dizzying the way the personal name asteroids turn up sometimes when you least expect them--and so many! Thanks for commenting, Jude