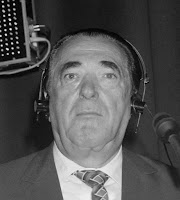 A brief bio of wheeler-dealer media magnate and Mossad superspy (and MI-6 agent or asset and ??) Robert Maxwell (nee Jan Ludvik Hyman Binyamin Hoch; June 10, 1923 Prag, Czech Republic MET 'noon') notes his enigmatic death by drowning off the Canary Islands, Spain, on November 5, 1991--somehow 'falling off' his yacht, suiciding himself, or being pushed. Conflicting autopsies indicated possible heart attack--he had both heart and lung conditions and had not been feeling well--or drowning possibly after slipping and falling due to a sudden heart attack or other event.

Reportedly there were no signs of assault on his body yet heart attacks can be helped along by nefarious stow-aways so we see the enigmatic quality of the fatal event. However, a second autopsy revealed "froth' in his lungs consistent with drowning--and it seems that he was about to face massive, reputation-shattering bankruptcy, a very good reason to commit suicide, get yourself murdered by disgruntled associates, or to elaborately fake your own death. Yes, the word inconclusive comes to mind which is one reason Maxwell's cause of death continues to seem suspicious.

Note that Robert Maxwell's natal horoscope is available set for noon (RR: X = date w/out time) if you're curious about his Gemini Sun and Moon in either Aries or Taurus. Of interest is the rounded-up Sabian Symbol for his natal Jupiter Rx @10Sco07 (11 Scorpio): "A Drowning Man Rescued." Then was his death a ruse? Jupiter is only one factor, yet there are ways, such as his wife and elder son identifying a look-alike as husband and father but that's quite unlikely, plus, he may already have been 'rescued' once too often during his life. Yes, astrological Jupiter is protective but is often active and near a chart Angle during times of death, whether fair or foul.

What we do know is that his body was located "at the end of the day" (November 5, 1991) so we have that to set a horoscope by if we wish (sunset at 6:11:16 pm UT Canary Islands provides a definite time to work from if you wish to have a look). Also his gone-overboard event from whatever cause seems to have occurred between approximately 4:30 am and 6:30 am UT according to testimonies by the yacht's crew members interviewed in the 53-minute video Robert Maxwell - The Downfall (in English with Dutch subtitles). Now at least one researcher has mentioned Maxwell as the Mossad agent who stole Promis software for Israel, then a 'trap door' was installed for spying purposes and sold to multiple governments around the globe--and to Osama bin Laden, but without personal knowledge I prefer to file that under So They Say. This post is only for entertainment purposes, after all.

And so amidst all the dates and hours known and unknown concerning the life and death of Ghislaine's father, Robert Maxwell, there's one cosmic factor (As Above, So Below!) that we have a definite moment for: the 11 South Saros Series eclipse that is Bob Maxwell's death Solar Eclipse which occurred on July 11, 1991 @18Can58. The themes of 11 South are quite descriptive of multiple events which occurred in 1991 including the mysterious death of journalist-writer Danny Casolaro whose research notes for the book he was writing on what he called The Octopus disappeared from his hotel room prior to the discovery of his body. Part of his investigation was the theft of Promis software and for more info, here's a What Really Happened? video originally posted here in 2016 concerning Danny Casolaro and The Octopus, aka, the global crime syndicate. 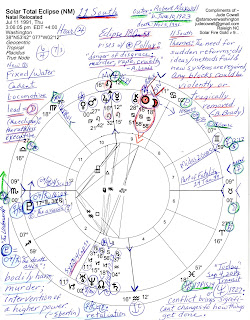 Above is the 11 South Solar Eclipse Horoscope of 1991 and its themes which to me describe the deaths of both Casolaro and Maxwell with Maxwell's natal planetary links penned in green around the outside for the sake of comparison. As you see, Maxwell's natal Jupiter Rx @11Scorpio rises (11Sco = "A Drowning Man Rescued', as noted). This chart is set for Washington DC although a New York chart works, too, and shows almost the same cusps. Setting the chart for Jerusalem (where he's buried on the Mount of Olives) or Maxwell's place of birth is possible but don't show as many Angular planets. Yet charts must be set for some location or another, and of course with an eclipse, the exact hour of perfection is chosen by the Great Cosmic Clock of which Planet Earth is a part.

11 South Themes: the need for sudden reforms; old ideas and methods fail and new systems are required in order to deal with events; any blocks could be violently or tragically removed. (Paraphrasing Brady's Predictive Astrology.)

Other potentials for violence, murder, bodily harm, and intervention of a higher power are in the horoscope and include: the eclipse rises with Pollux (danger of disgrace, murder, rape cruelty--A. Louis) and leads a Locomotive shape of planets denoting the ruthless, high-powered executive determined on success (Maxwell or...?); planet Pluto of the Underworld, aka, 'the assassin' rises in intense Scorpio (the sign associated with death) with Pluto apex in a midpoint picture with Mars-Saturn (the 'death axis'--Ebertin) so we have potentials for rage and fury of destruction, bodily harm, death, and murder. Also rising is Venus-Saturn = Pluto: retaliation, separation, and/or passing states of chaos (Ebertin).

Additionally, there's Maxwell's natal Neptune (ruler of the oceanic realms) @15Leo54 conjunct the Midheaven of this chart which suggests loss, death by drowning (or by heart attack: Leo), dissolution, identity change, subterfuge, and/or deception as possible goals (MC). Then with his Jupiter conjunct ASC and Neptune at MC, the speculative, bubbly, wastrel pair of Jupiter-Neptune are prominent for him at that particular period in relation to the eclipse suggesting potentials for misjudgment, fraud, deception, and living in a dream world that results in a rude awakening. Could Pluto in Scorpio provide such a rude awakening? That would be my suspicion, in an assassin role or not.

And note that marked on the chart, lower right, is the current position of transit Neptune @17Pis27 closely conjunct the natal Uranus (17:29) of Robert Maxwell which suggests generational conflicts that bring significant changes to how things are done. This reminds me, if not you, of the 11 South eclipse themes and the fact that a poorly performing Bob Maxwell was on the verge of facing bankruptcy, disgrace, loss, and possible prison not to mention how his fate would affect his offspring, wife, his investors and associates (underworld and otherwise). He'd mismanaged finances for a while imho, plus, years of over-indulgence had taken a toll on his health as well so whether or not he 'fell' or whether steps were taken against him before he could 'name names' remains a mystery--including in the spy world. Yet this is a typical mystery since death from one cause or another can be an outcome for people who 'know too much' and this could be the case according to the messages lurking within the 11 South eclipse horoscope. Unless you have other ideas?