What about Trump's 5th Harmonic Pluto?

September 12, 2019: As you already know, the Sun-Pluto planetary pairing relates to the craving of power and ruler-ship and the attainment of power (Ebertin). The abuse or misuse of power is also possible and in America's July 4, 1776 horoscope/s Sun in mid-Cancer and Pluto Rx in late Capricorn are in a compulsive-obsessive quindecile (+/-165 degr) aspect denoting Washington DC as ruthless, manipulative, and intimidating in its drive for power and control.

Then today as I reviewed a long-owned book by David Hamblin which concerns one of my favorite branches of Astrology, Harmonics, my eye was caught by the 5th Harmonic, or the 'H5', as I prefer to term it in my notes, and an interesting feature of unaspected planets when converted to the H5. Often on the look out for another way to understand this complex wheeler-dealer using astrological principles, and knowing that Donald Trump (June 14, 1946 10:54 am edt Queens, NY) was born with Pluto @10Leo02 unaspected in the 12th house of the Unconscious, Politics, and Karma, curiosity got the better so I transformed his natal chart into an H5 chart just to see what his natal Pluto would 'do', if anything. 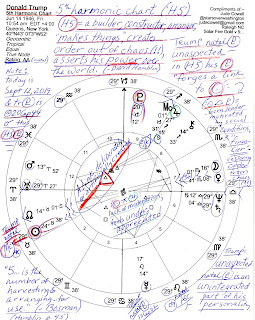 Turns out that in his H5 chart, Trump's Pluto @20Capricorn forms a trine to his H5 Sun (which conjoins his natal MC conjunct angry Algol!). Now according to David Hamblin, when an unaspected natal planet (split off from or unintegrated into the personality) aspects another planet in the native's H5 chart, Fiveness = an "unnatural link" that is "forged in an artificial or deliberate way" between features that are "naturally felt to be separate" and this relates to building, constructing, arranging, and harvesting for use. Then Hamblin cites John Harvey and John Addey for pointing out that, "Five is connected with power since "to be able to arrange matter into form of one's choosing is to exert power over it." And of course, astrological Pluto on its own is a planet of power and of hidden or invisible power (and of Underworld connections and extreme wealth like Trump's--secreted away and hidden in his 12th house like a puppet master pulling his strings.) And, funny thing--today transit Pluto @20Cap44 conjuncts Trump's H5 Pluto!

Now five relates to the mind of man and "is the first number in which man asserts his power over the world." So one of the most disturbing things to me is that, "--within the principle of Fiveness, {he} strives to change the world and to make it other than how he found it." Well, Trump is definitely all about that, and apparently he's aided by an H5 Sun-Pluto trine to do it, hidden though it may be. Does the trine reveal powerful criminal elements assisting him with his government sabotaging and wealth-purloining endeavors? Unsurprising, if so.

Yet psychologically the most curious part of it all may be that Trump prefers to rule by chaos--he's a chaos-creator with his oriental Uranus @18Gemini (in 10th house of Career) which means that erratic Uranus is his guiding planet (last to rise before his Sun @22Gemini) and he's certainly known for suddenly changing of his mind back and forth, and creating shocks and disruption all around him, plus, there's his alleged tendency to rule by unusual notions and whims (Uranus in changeable Gemini).

And yet his H5 Sun-Pluto trine supplies the power for something he could use and impress us with if only he would--Trump can "create order out of chaos"!

And there, my friends, is yet another example of the complex personality and paradoxical nature of the cantankerous Donald J. Trump who, on a deeper level, and despite his advanced age catching up with him, may not be as quirky and erratic as he pretends to be. Especially fancying himself as a world class thespian and all.

https://www.solunars.com/viewtopic.php?t=301 Some reading on 5th harmonics I found.

Thanks William! Jim Eschelman's info on the 5th Harmonic is fascinating and I found his remarks on Hitler's H5 particularly insightful esp in relation to Trump. jc