May 13, 2020: As you know, any solar or lunar eclipse may act as a 'wild card' or 'cosmic blink' that disrupts events, lives, and/or circumstances much as quirky planet Uranus can do, and karmic changes of direction are typical results. Uncovering secrets, inconvenient facts, and/or scandals may also occur around the time of an eclipse - or earlier, later, or never - also much as Uranus can do. Of course, eclipse effects depend on where in one's horoscope an eclipse falls with outcomes usually manifesting within the house (department of life) along with any aspects made by an eclipse to our natal placements.

So checking cosmic happenings for December 2020, we find that Trump's natal (Total) Lunar Eclipse @23Sag04 will be 'eclipsed' (conjoined) by the 4 South Solar Eclipse of December 14, 2020 which suggests, among other things, the potential for some sort of culmination or completion--probably in his relationships (Sun-Moon). Synchronistically, we should also note that the 4 South Eclipse in December will 'eclipse' his Inauguration 2017's Saturn, planet of responsibility, accountability, reliability, integrity, and realism - and his natal Moon and South Node.

That's a boat load of karma coming for Donald Trump but let's not gloat just yet. Things could turn out peachy for him given all the foreign and domestic aid he receives, plus, where Trump goes so goes America. Because We The People are players in this cosmic card game, too. And although karmic progress is always a possibility around eclipse time, positive traits of the eclipse sign must be the objectives to express. In the case of Jupiter-ruled Sagittarius, the primary themes are truth seeking and upholding moral and ethical principles. Well, we know this doesn't pertain to con man Trump (who may still be around in December 2020!) so let's add here the negative possibilities for a solar eclipse in Sagittarius which will relate to society in general along with Trump, his Republican enablers, donors, comrades, and supporters:

Negative Connotations of a Sagittarius Solar Eclipse: moral principles may be incorrect which results in misplaced idealism or misguided beliefs so that karmic endeavors are ineffective and can magnify problems rather than solve them. Indulging in exaggeration misses the mark or falls short of objectives while false optimism causes karmic conditions to be underestimated and thus ineffectively or wrongly dealt with, neglected, or ignored. Therefore, true progress will be lacking, illusory, or temporary at best.

And as we know, for Donald Trump appearances are everything.

For more eclipse details see Rose Lineman's excellent booklet on Eclipses published in 1992 by the AFA.

So if you enlarge the image and read my scribbled notes, here's the 4 South Solar Eclipse Horoscope of December 14, 2020 set for Washington DC and snugged around the Inauguration 2017 Horoscope which shows the eclipse of 2017 Saturn in the financial 8th house and 2020 Mars conjunct 2017 Uranus (nontraditional or radical methods and/or danger of explosion in the 12th house of Politics, Large Institutions, Behind-the-Scenes, and Karma--yet another Trump hissy fit?): 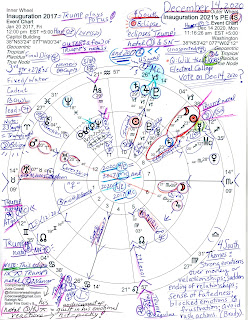 Adding 2017 Saturn to December's 4 South eclipse energies, on a negative level we find people such as free loaders, deadbeats, and those who prefer to shirk responsibility while casting blame on others. Meanwhile, their hard-to-break personal habits interfere with what could be karmic progress along with a failure to take problems and obligations seriously. Related is the fact that Trump was born with a Moon-Saturn inconjunct showing an undercurrent of guilt and nit-pickiness in his emotional reactions to others (exs: reporters! Democrats like Schiff, Schumer, Pelosi!) as he continually projects blame upon anyone but himself for deeply emotional and neurotic reasons. And as we've learned in excruciating detail, his is a personality completely unsuitable for the Office of President of the United States of America.

So tell me: what cosmic card do you think Trump will draw in December 2020?

I smile at your comment about "another Trump hissy fit." He has one every day, we don't need to wait until December. (Even though I wish we only had one every six months.)

WiseLalia Yep! and now that Summer 2020 has started with Trump "dominating" the streets of DC with black helicopters his fits must be hissier than ever before! Jude