And probably most people would agree that the first election of democrat Franklin D. Roosevelt on November 8, 1932 was certainly for him a "rise to power" in the US but today, in light of current societal conditions, let's consider a different rise to power which occurred in 1932 Berlin via the Solar Eclipse that 'announced' it: the Prenatal Solar Eclipse ('PE') of the Nazi Rise to Power in the 6 South Saros Series which perfected on August 31, 1932 @8Virgo09 (Berlin eclipse horoscope shown below). As you see, the transiting planets now in late Capricorn cluster about the Midheaven ('MC'; The Goal) and the Saturn Rx of this eclipse horoscope. So it may be significant that 6 South's 1932 Saturn Rx @28Cap55 returns to natal degree three times in 2020, the first time already passed: March 9, then July 17, and December 6 with transit Pallas @29Cap42 (strategy, wisdom, ethics) on December 6th conjunct Nazism's 1932 Saturn.

Naturally, Saturnian-style karma is suggested in some form or another which may or may not include the loss and restriction so prevalent now. Hopefully, the wrong kind of consolidation is not part of the karmic picture. For we know that Saturn brings needed lessons and always demands realism, integrity, and accountability but sadly there's not a lot of these going around, not by radical reactionary forces anyway. (Their jam is deception and erosion inspired by Neptune now in shady Pisces.) So it's up to Establishment forces to demand and hold accountable miscreants and saboteurs endeavoring to take over America against the will of the people. And of course, We The People must perform our roles as well, however we can, to resist. (Yes, writing Stars Over Washington is my primary effort for America and has been for nearly 15 years! My street protest days ended several moons ago.)

And it seems to me no accident that the 1932 Solar Eclipse @8Virgo conjuncts the degree of both Election 2016's and Inauguration 2017's Prenatal Solar Eclipse of September 1, 2016 (a cosmic time link by degree, not Saros Series) which tragically was opposed by transit Neptune @10Pisces. This opposition gave Neptunian forces many opportunities to confuse, cloud, hide, and erode the 19 North themes of the 2016 Eclipse: 'realism, coming down to earth; a good time for tackling the truth' (Brady). For as you know, astrological Neptune when expressed negatively is allergic to truth, scoffs at reality, and perverts the straight-forward course, as do demagogues like Donald and--dare I type it--Adolf. After all, honest demagogues and dictators can never win so they must resort to deceit and fraud for their fake victories!

Please note that this post is not about the subsequent Fascism Rising Solar Eclipse of 1933 @5Pis29 in the 7 North series of 'deep passion' and 'lust' but the Total eclipse of August 31, 1932 with themes that are descriptive of the fascist/nazi/seizing power era of the 1930s--and of current conditions across the globe as America nears her first-ever Pluto Return/s in 2022 when 6 South comes again:

Therefore, dear reader, perhaps we agree on these disturbing topics so consider the following (for those who do not already know): a 6 South Solar Eclipse repeats @2Scorpio on October 25, 2022 and will be the PE of America's third of three Pluto Returns which occurs on December 28, 2022 (@27Cap32). Now stealthy Pluto was in Moon-ruled Cancer in the 1930s fascist era (nationalism; tribalism) but now, in our Pluto-in-Saturn-ruled-Capricorn era, neo-Nazism again rears its vicious Medusa head spurred by mouthpiece Trump, and as Saturn-ruled Pluto destroys structures and traditions, Pluto in Capricorn bears the unfortunate imprint of The Dictator (Ebertin). Plus, when Saturn and Pluto conjoined on January 12, 2020 @22Cap46, their harsh energies imprinted upon Year 2020 (and for the next 33 years or so) and their conjunction 'hit' the Vertex of fated encounters and possible wish-fulfillment in the natal horoscope of Donald Trump, as we've previously discussed. As you know, these harsh energies oppose Trump's natal 11th house Saturn--in watery, tribal Cancer. It's all very Moon-Saturn-Pluto abuse and misuse of power, isn't it?

Well, one difference between Nazi 1932 and Trump 2017--2022 that we have going for us is that the violent 'Marseillaise Trio' (Mars-Jupiter-Neptune) of 1932 is not aligned now as it was during the French Revolution. Enough of a saving grace? Turns out in May 2020 it is not for it's only one factor in a boatload of many, both positive and negative. Besides, white nationalism is 'on the rise' with Trump in the White House (our national Masonic Lodge). And nowadays we're experiencing the consequences of the traveling heavyweight trio of Jupiter, Saturn, and Pluto so recently joined by hothead arsonist Mars in March 2020. Besides weaponry, mundane Mars has a well known link to needles and injections - to anything sharp and/or invasive actually.

Yet hope springs eternal for America stopped Nazism before and must stop the brutal movement again in order to protect and keep some remnants of the democratic Republic we've known and prefer. 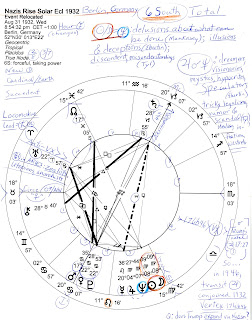 As noted, above, a 6 South Solar Eclipse repeats on October 25, 2022 @2Scorpio. And as Rose Lineman informs us in her booklet on Eclipses, a solar eclipse in that intense Mars-Pluto infused sign denotes, "Scorpio's gift of probing insight (which) enables one to discern root causes of karmic situations and problems."

And this resonates with protecting and keeping some remnants of the democratic Republic we've known for, as everyone knows, monsters must be identified and directly faced in order to vanquish them!

For the sake of comparison, here's the same Nazi Power Rising Horoscope set for the White House Washington DC 2:54:32 pm EST with Cardinal Point 00Cap48 rising and a Libra Midheaven sporting - thank goodness! - two beneficial stars that relate to the Founding of America: Spica, the spike (Washington Monument) and Arcturus (the White House) with its key phrase: a different approach (democrat FDR!): 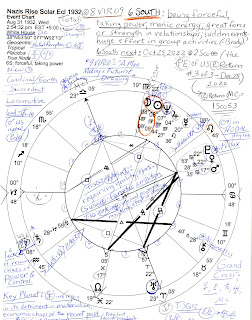