Agent Trump Wants Pal Putin's Russia Back in the G-7

June 30, 2020: For unknown reasons, I saved the following post as a draft but never completed or published it. So with the current news about Trump knowing for months that Putin had put bounties on the heads of US soldiers in Afghanistan but did and said nothing about it while continuing to tout Russia's re-entry into the G7 Group of nations I'm posting it today for whatever info it may add. Even US voters who somehow, beyond reason, prefer Trump in November cannot possibly be okay with this. 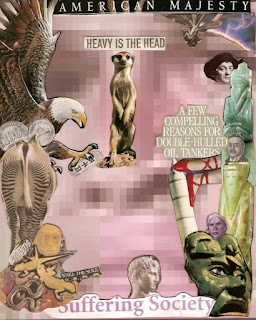 Collage: 'His American Majesty' by Jude CowellMay 31, 2020: Citing current G7 members, economic royalist Trump has asserted that, "It's a very outdated group of countries" which makes yours truly wonder how "outdated" his nibs considers America to be 'under his watch.' That's not exactly what he meant, of course. He meant, Let's invite my comrade and favorite co-conspirator Putin to the party! He proposed including Australia and a couple of other countries to make things appear more legitimate as they talk behind China's back about the future of China, their alleged G7 intention.

Say, remember when Canada flatly rejected Trump's idea of allowing Russia back in? As you know, Russia was tossed out of the elite group of social tinkerers in 2014 for annexing Crimea, an ongoing tragedy as I type. See a related post Trump-Putin Alliance Threatens Current World Order. This is the entire globe's ongoing tragedy and I don't mean to imply that I consider China an outsider to "The big picture (that) commands a certain course of action which must be followed, very little option to do otherwise" (Tyl) which was timed for greater implementation all through 2017 into 2018 by transit Pluto conjunct 1993's Great Conjunction/s of Uranus and Neptune, the 'new world order' planets (18--20Cap). Perhaps those who could not 'see it' in 2017 are seeing draconian conditions starkly enforced in front of their faces in 2020 if they haven't before. And as you know, the current position of the Moon's South Node, aka, the tail of the dragon, is 29Sag13, a critical-crisis 29th degree (Sabian Symbol for '30Sag' = "The Pope Blessing the Faithful" as I'm certain he does; '30Sag' = negative expression: "inordinate love of self-display and surrender to a lust for power" (Jones).

Now so far I've discovered no definite date for a G7 meeting in September 2020 for it may not have been set yet, so we can't Moon-track the event today as we did in 2019 when Trump knocked noodles 'on the sidelines' with UK PM Boris Johnson. Apparently Trump prefers shadowy sidelines for his private whispers. Like ya do when you have many secrets and crimes to hide.

So as you know, sources are reporting that Trump's G7 2020 'plan' is to postpone G7 2020 'until at least September' from the original June 10, 2020 date and location at secure Camp David where barely a conspiratorial word can be whispered without a mic or camera picking it up - another reason for Trump and Putin to rock the G7 boat, yes?

With no definite date for G7 2020 (if you find one Please let me know!) we can at the least check the September 2020 Lunations (New and Full Moons) where we find that the month begins with a Full Moon @10Pis12 (September 2), an interesting cosmic occurrence since deceptive Neptune was @10Pisces opposite the 19 North Solar Eclipse that functioned as the Prenatal Eclipse of both Election 2016 and Inauguration 2017. Will new information be uncovered or leaked in September or late August concerning those significant events and/or the Trump-Putin love match? For Full Moons can reveal hidden things much as Lunar Eclipses, and New Moons can act in similar fashion to Solar Eclipses (Ovason). So you know what I always say around eclipse and lunation times? Peep-Eye!

Tragically, a Related Post: America, Neptune-Pluto, and Organized Crime. Also related: if Election 2020 is held at all, the Electoral College Is Set to Vote on December 14, 2020, an auspicious day of a difficult Solar Eclipse. Plus, here's a previous post concerning the learless feader: SOTU 2020 and Trump's SOTUs since 2017 and for health indicators you may wish to see The YOD in America's Solar Return 2020, a horoscope that functions for one year until July 2021.

All on-topic comments and shares are much appreciated! And please note that a 'new' page under 'Judith' Cowell is now created since my original FB account 'Jude Cowell" remains in lock down. jc