As you see, warrior Mars conjoins Midheaven (MC) for all the world to see (Mr. Trump and his first overseas tour?) while transit Saturn @26Sag10 Rx conjoins the IC and has been opposing US natal Mars off and on since December 2016 and will do so again including a Direct Station @21Sag11 a few days after The Great American Eclipse of August 21, 2017 @29Leo (hitting Mr. Trump's natal Ascendant and royal Regulus and singeing his natal Mars @26Leo), a rare 'cosmic blink' event which will be visible from West Coast to East--and which can be seen here conjunct the 12th cusp of this return chart--the 12th house of karma, self-undoing, politics, large institutions, and backroom deals: 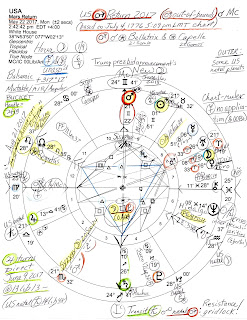 As for aspects to and from Mars (the star of this show) its only applying aspect is the opposition to Saturn, however, the Moon (the public) sextiles activist Mars (2A14) which denotes opportunities for self-reliance, discipline, but also compassion to be shown. Holding back or repressing feelings in order to conform is a possibility as is having the wisdom to avoid conflict. Others are accommodated until the sense of fairness is violated or some other provocation triggers a firm stand and battle is entered.

A very prominent aspect is Tr Saturn opposing natal Mars: resistance, frustration, gridlock. Chart-ruler Mercury @6Tau51 in 8th house of Corporatism makes no applying aspects (or any other) and is out-of-bounds; radical Utopian Uranus continues its lurch through Mars-ruled Aries where it is joined by Venus, the lady traveling with asteroids Isis and Toro, a power asteroid that hints at nuclear power. Bucket handle Jupiter @13Lib41 Rx rises in 1st house offering some measure of protection (as ruler of 4th house, Saturn, and 7th house) while conjoining US natal Saturn (a partial lifting of burdens).

Saturn and Uranus trine one another and, with North Node, form a Fire 'Grand Trine' of protection and connection which suggests those with many plans for the future but who may also demand loyalty from others. (If this sounds like Mr. Trump, it's meant to.) The aspect is a natal echo from America's 1776 Saturn-Uranus trine (then in Air: Libra-Gemini) which is/was compatible with future generations of Americans who can/could easily identify with our original form of authority. Our government's current perpetual war stance? Not so much.

Now a few quick words about Venus @16Ari33 since she's traveling with asteroids Isis and with Toro, a power asteroid that hints of nuclear power potential--in the 7th house of Partners and Open Enemies. Those are the few quick words.

Air-Fire Sun Gemini-Moon Aries is a personality blend of a 'beguiling trickster, a natural leader, a great persuader and salesman', and 'an egotist who shows partiality and rides roughshod over others'. (Sun Sign-Moon Sign, Charles and Suzi Harvey). Here is a descriptive quote by Robert Morley who shares this as his natal Sun-Moon blend:

"Show me a man who enjoyed his schooldays and I'll show you a bully and a bore."