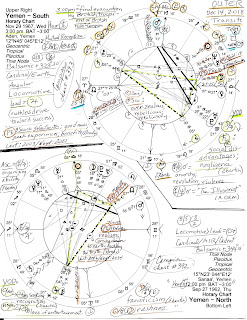 The horoscope of Yemen South is currently more activated of the two and is accurately timed so today's transits (Dec 14, 2018 est) are penned around the chart. Most notable is that Yemen's natal Mars @28Cap11 in 10th house is in process of being squared by transit Uranus @28Ari49 with both planets and their square having links to war, revolt, destruction, violence, explosions (bombs), injuries, and danger.

Another current indicator of war and violence is the transit South Node, a Saturnian point of restriction and loss (aka, 'the tail of the dragon') now swiping across Yemen South's natal Mars in Capricorn.

Then both charts reveal crisis-ridden YOD patterns within them. North's apex planet of its YOD is Jupiter Rx in Pisces, a compassionate sign for Jupiter yet as apex planet this denotes expectations that tend to fall short of their promised potential due to poor judgement, procrastination, and/or over-reach and this brings fateful consequences. In South's chart, we see 12th house Saturn Rx in early Aries (where transit Chiron is scheduled to visit later on) as apex of the YOD which doubles the karmic potential of the YOD and suggests an inherent ambition, plus, a destiny replete with determination, commitment and resolve if the energies are correctly faced and handled. Obviously, maturity and social responsibility must be part of apex Saturn's demanding imperatives and periods of Yemen South's Saturn Returns would be times when YOD conditions would be most in force with many lessons to learn. South's last/current Saturn Return was a three-fer: 1. June 3, 1996; 2. September 3, 1996; 3. February 21, 1997 - all when Bill Clinton was inhabiting the White House. South's next Saturn Return will perfect on April 2, 2026.

So as you see, transit Pluto @20Capricorn+ (a critical-crisis degree) is about to cross Yemen's Midheaven (21Cap10) with transit Saturn close behind. In fact, the two karmic planets' Great Conjunction takes places January 12, 2020 @22Cap46 (see link, below) and will form a midpoint picture of potentials for Yemen: Saturn-Pluto = natal MC: desire to rise from difficult circumstances through the application of tenacity and endurance; severity; one-sidedness; self-sacrifice; asceticism (Ebertin).

And perhaps you've noticed that Yemen's Mars @28Capricorn conjoins the power-mad, manipulative natal Pluto of the United States (27Cap33 Rx). We can see this planetary connection in such inconvenient-for-the-Pentagon facts as Shrapnel in Yemen ties US bombs to civilian deaths, a massive cosmic peep-eye for we Americans who are usually the last to know what the Pentagon is actually up to abroad.

So what if anything is Washington doing about our complicity in these tragic, heart-wrenching war crimes in Yemen? Well, the US Senate voted to end our nation's involvement in the war at least in part but the vote is probably merely a symbolic gesture especially with Mr. Trump unlikely to sign on to the idea of putting an end to the bombing of Yemeni women and children. After all, Big T likes to cage children, we know - and he remains a supporter of the Crown Prince of Saudi Arabia in spite of the Saudi-ordered assassination of Trump-critic and Washington Post journalist, Jamal Khashoggi. Of course, big money, pay-offs, and favors are involved, a probability which neatly sums up the entire situation for the superficial Donald Trump who prefers to do just like his mentor Putin would do.

Wouldn't it be wild and crazy if Melania turns out to be asset Trump's handler?