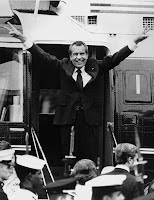 Thursday, Aug 9 is the 33rd anniversary of Richard Nixon's resignation from the Office of the Presidency.

And here's the Home link to WaterGate info if you want to skip the resignation letter. It has a handy Timeline, and more.


Shouldn't Bush be taking a page from Nixon's White House stationnery by now? you ask.

At Nixon's resignation, tr Saturn (13Can22) was conjunct America's n Sun which represents the leader in a nation's chart. Saturn brings along lessons, accountability, and may bring loss based on past actions which are opened to review. (But Saturn rewards long-term effort where it's deserved!)

With Nixon's n Saturn (27Tau29) in 9th house and n Pluto (28Gem39) in 10th house of Public Status/Career, a fall from grace based on irresponsibility (misuse of authority...Saturn does not like that) and abuse of power within Career (Pluto) wasn't written in stone--our charts are not, y'know--we choose how to use what we were born with--but it would've taken a stronger, more self-aware individual to fight against the temptations of power than Mr. Nixon possessed.

His proud Sun Cap/Moon AQ personality blend gave him a need to always be in control to the point of torment, and much emotional insecurity with a deep fear of rejection. He was deeply suspicious of everyone, as we know, and had an ability for ignoring people and matters which didn't interest him.

His AQ Moon indicates a detached mother, Cap Sun shows an authoritative, perhaps cold, father...not a very cozy childhood, and it's debatable how helpful his early religious training was to him emotionally. He never got over his sense of inferiority--and the only other n planet above the horizon in his birth chart is nebulous Neptune (24Can46) in 11th house of Groups and Associations.

I suppose you could say his secretive, 11th house Neptune 'served' him as he colluded with the White House "plumbers" and their Dem spying/burgling plans which resulted in the Watergate scandal. Of course, the full-of-lies Vietnam War was underneath it all, as the Iraq War is underneath Bush-Cheney's impeachment troubles (among other things--there's much to choose from with this crew, the worst we've ever seen.)

Having struggled unaided to the peak, a mountaineer hitches a ride on a passing helicopter.

Sounds like his final journey from the White House when it wasn't so certain that he would not be prosecuted. My guess is that he was glad to be saying farewell without a stripedy suit upon his back, and I remember that day, seeing him on TV, saying buh-bye, which brought me to tears.

This sad, pathetic excuse of a president had ruined my favorite city--I lived in D.C. during Watergate, and the pall that Nixon cast over the city hung over us like a wet blanket of corruption. My tears were deeply sad for 'my' beautiful city, but were also tears of relief to see him go.

Buh-bye, indeed, but save your 'victory' signs for something more honorable. (Crooked presidents make me mad-as-a-wet-hen, then as now.)

And so, as Bush-Cheney and their chickenhawk pals weather the storm of distrust they have brought upon themselves--and with America's safety valve of the Impeachment process undermined by the charade that was Bill Clinton's impeachment--Saturn's Return to conjunction with the US n Sun (after nearing it beginning in the second half of Oct 2003) was exact June 10, 2004...therefore, Saturn conjuncted Bush's n Sun in June 2004 as well.

My question is: what are we waiting for?
Posted by Jude Cowell at 12:05 PM