Horoscope of Venus Transit 2012: Equal Pay for Women, a Recall Vote, and a Queen

In May I blogged aloud whether Greece would leave the EU in tandem with Venus transiting the Sun, a rare cosmic event occurring today or tomorrow (June 5 and 6, 2012) depending on where you are located on Earth. NPR has good coverage of the event, text or audio.

Astrologically the Transit (or Occultation as Venus journeys between Earth and Sun) may be seen as a conjunction by degree....On the level of Politics and Business, it may be interesting to consider the implications of the Sun/Venus combination. Is it synchronicitous that the US Senate is set to vote this afternoon on equal pay for women (Venus) with Republicans carrying their usual flag for Business (men), while Democrats say they're championing equal pay for Women?

Yes, Venus' material values and money are on top of many menus this week with feminine Venus transiting the masculine Sun.

Now concerning the Senate'e procedural vote today, Sun = business (usually men, certainly ego and here paternalism with Venus signifying not only women but evaluations and material earnings (in the US women earn 77 cents for each dollar a man earns so we see who is more valued in American society--even though many women are the only breadwinners for their families, a circumstance seldom of their own choosing.)

Now in my blogging quest to provide you with the best astrological information I can muster, I shall quote from Midpoints: Unleashing the Power of the Planets by Michael Munkasey even though Mr. Munkasey isn't a fan of being precisely quoted and considers his analyses inspirational. Well, so do I. But helpfully, his format uses the Hegelian Thesis-Antithesis model with the resulting Synthesis turning up in the realm of Experience or Outcome in society; naturally, with Venus Transit 2012 visible over the planet, the following may apply to any nation or business-related endeavor:

Potentials for Sun/Venus in Politics and Business:

"Thesis: Using the wealth available to a nation or business to sustain its image or authority; how a society shapes the direction of its growth; the nature of reserves, resources, and the role they play in development.

A leadership which doesn't appreciate the role that art or culture plays in developing the character or identity; a society which is estranged from its leadership; little development of artistic or musical heritage."

We may look to today's re-call vote (Venus re-trograde in voting Mercury's sign of duplicitous Gemini with Mercury out-of-bounds of the earthly plane--watch for vote-counting discrepancies and hopefully a large record-breaking turnout with Mercury OOBs) on paternalistic Wisconsin Governor Scott Walker (Sun) with collective values and workers' rights hanging in the balance (Venus!), the current and very soggy Jubilee celebration of Queen Elizabeth (signified by both Venus and the Sun--or is the Sun her master?!), and other news items for clues concerning real world outcomes of Venus Transit 2012. Click to read of the Queen's celebration which has made barely a ripple on this side of the pond; included is one Brit's comment on Her Majesty's remoteness (aka, 'estranged' as mentioned above) as Venus sails across the Sun like a very damp flotilla cruising the River Thames.

Now here's a view of the Venus Transit 2012 horoscope set for the Capitol Building Washington DC; please to click to enlarge and read my scribbly notations for midpoint pictures, a T-Square pattern between Jupiter/NN and Neptune, and more; US natal planets are penned around the outside of the chart with US n Saturn 14Lib48 (lawmakers; managers; Democrats) at MC, the Goal and Public Status point; as you know, Saturn in 10th house is the 'fall from grace' indicator if Saturn's lessons of maturity are not learned, honesty is not upheld, and life's responsibilities are not honored (I'm looking at you, US House of Representatives--and at men who abandon their women and don't pay child support...ya know who ya are): 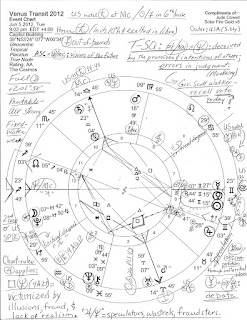 Sun and Venus @ 16 Gemini: "A Woman Activist In An Emotional Speech Dramatizes Her Cause" = "the PROSYLYTIZING MIND...Keywords: A passionate response to a deeply felt new experience." (Dane Rudhyar's An Astrological Mandala.) Noted on the horoscope is Venus Transit 2012 taking place Tropically among the stars of Orion the Hunter.

And the negative (unconscious/shadow side--jc) expression for '16Gem' as given by Marc Edmund Jones in The Sabian Symbols in Astrology?

"A bias forever exalting itself."

Sounds just right for a self-satisfied Sun/Venus conjunction and super-decriptive of the majority of our self-serving US Congress members who continue to place power, wealth, and weird Utopian ideologies far above the needs and preferences of We The People whose government it is.

Raise taxes on the rich who can afford it--and stop waging war!

Blog Note: happily I direct your attention to the top of this blog's sidebar for a new and wonderful addition to the resources of Stars Over Washington, or simply click: Find the Data: Comets and Asteroids. I hope you'll check it out--and a Thank You to Megan Funk for alerting me to its value!