A Question about American Utopianism

St. George and the red cross are emblems used by many countries, regions, organizations, and entities through the centuries, including medieval times. Today the modern 'Red Cross' organization is a well known example of its use as a symbol or logo and the 'rosy cross' of 'Rosicrucianism' represents a secret organization that favors a mythical beast that is seldom if ever glimpsed by non-members. More details here.

Yes, the Banner of St. George was notable (and one supposes inspiring) at the Battle of Agincourt and yet my current fuss is this: precisely why is a flag or banner with a red cross on a white field prominently displayed in the following painting of a tableaux of Thomas Jefferson's presentation to Congress of the completed Declaration of Independence? You see the red cross floating over Jefferson's head so is this a wordless message revealed via symbol? For one thing, Jefferson's effects after his death (on July 4, 1826) included a Rosicrucian decoder intended to read and write secret messages. And yet it was Great Britain where Rosicrucianism became uppermost, with Templar Freemasonry sprouting and growing wildly in the New World of America (though some say the two brotherhoods united at some point). 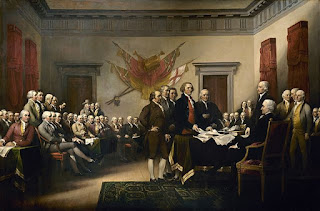 Here are details on John Trumbull's famous painting, above, of the moment Thomas Jefferson presented the first draft of the Declaration of Independence to John Hancock, president of the Second Continental Congress, on June 28, 1776. Last I heard, the 12' x 18' masterpiece hangs in the Rotunda of the Capitol Building. Standing with Mr. Jefferson are John Adams, Roger Sherman, Robert Livingston, and Benjamin Franklin.

Now as you know, Mr. Jefferson was a quiet man who whispered and stuttered when he spoke, and keeping secrets was a natural inclination for such a man particularly when involvement in certain activities could forfeit you your fortune and your life. Perhaps wisely, Jefferson never admitted actual membership in any secret society that I know of but we can surmise his knowledge of principles, plus, Monticello sported paintings of the three men whose intellect he admired most: Bacon, Newton, and Locke.

So I confess that there are times when the idea of an alleged "Book of Secrets" that's said to be for very few eyes suggests to me that whatever American secrets there be are totally different from what we've been propagandized through the centuries to believe about our Platonian, Utopian nation, the only country ever founded upon an ideal. From capstones, hollowed out crevices in cornerstones, and whatever is secreted under DC's Ellipse, to that infamous "Book", We the People surely must have stunning revelations ahead of us if Bacon's Vision is ever fully revealed. We may not like it but there it is.

Now with the recently denied potential of electing the first woman president, I had speculated that if such a thing happened, it could be symbolized by flipping over America's Great Seal in order to bring the more esoteric, unconscious symbols on the reverse more fully into our conscious minds. You know--the 13-step 'pyramid of power' which relates symbolically to the Midheaven degree and sign (on or about 26 Capricorn these days) in America's inaugural horoscopes (January 20th noon Capitol Building) -- the area of the Zodiac where Pluto in Capricorn now creeps. Plus, a late Capricorn MC places US natal Pluto Rx there as well along with America's progressed Pluto at 29 Capricorn, a critical or crisis 29th degree (as is 26 Cap). On Inauguration Day/s, our opposing Mercury Rx at IC echoes, along with sneaky Pluto at MC, the whisper of a nation of secrets, spies, hidden rulers, and a veiled mission.

And since Pluto was discovered in 1930, let's go ahead and say that when Freemason President Franklin Roosevelt had Inauguration Day changed from early March to January 20th (March 1933 to January 1937), he knew exactly what he was doing and what would eventually happen: transit Pluto in Capricorn ('the dictator') would hit the highest, most visible spot in US inaugural horoscopes, the Midheaven, the point of Goals and Aspirations...the pinnacle of worldly power, we might call it...and this would symbolically signify a display (MC) of might and Empire (Pluto in Cap) meant to be seen worldwide across the globe and denote Saturnian control (Capricorn) of the Earth itself.

How quirky that someone has selected a braggart nationalist like Mr. Trump to implement the final stages of Global Government when that's just the kind of thing he campaigned against! Perhaps he's only intended to corral Americans into place while continuing the destruction of the US Constitution that stands in the way of open borders and worldwide corporatism...they've already dispensed with the Constitution in the realms of habeas corpus, preemptive war, and brutal suppression of peaceful protest.

So here is another question: wonder if the Utopian society the Founding Fathers envisioned bares any resemblance at all to the crap government that anarchists have been busy downgrading America to? Because with Trump losing the popular vote on November 8th, consent of the governed is totally missing as is 'a mandate' for president-elect Trump and his austere sidekick, the boo-worthy Mr. Pence of Indiana.

Wikimedia page of the top image {Public domain} of St. George on his steed surrounded by 'rosy crosses'.