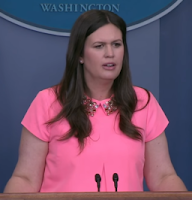 Sun @20Leo36, Moon @6Gem50 (Gemini, sign of communications, news, reporters, and duplicity--and near Mr. Trump's Prenatal Eclipse degree and US natal Uranus @8Gemini). Planet of communications and the press, Mercury, is around 8Virgo. Virgo is the sign of her father's natal Mercury as well and indicates one who is capable of attention to details, has specialized skills, is practical, and suffers from an inability to comprehend the whole. Criticism is also part of the Virgoan Mercury picture, both given and received. Well, she's in the perfect job for that working under the yoke of Donald Trump, ace critic.

Now the earliest possible position for her natal Moon is 29Tau47 (conjunct Midas!) so the chances are good that her natal Moon is in Gemini. However, below are the weaknesses of both Sun Leo-Moon Taurus and Sun Leo-Moon Gemini personality blends for the sake of comparison and because emotionally she seems to have more of a stubborn Taurean streak than that of a bright, witty, butterfly-like Gemini. Perhaps you know better. If so, please share!

Quoting Sun Sign-Moon Sign by Charles and Suzi Harvey, the weaknesses of a Sun Leo-Moon Taurus combo of energies ('the bulldozer') include, "Tendency to be intensely subjective and biased, proud and inflexible with inferiors; to be overtly selfish and withholding if offended and to speak out scathingly without thinking when a little diplomacy would win people over and magically move the obstacles that seem to stand in (your) way." This personality blend is shared by Bill Clinton and Carl Jung.

Sun Leo-Moon Gemini weaknesses include, "A tendency to rationalize; general restlessness and fickleness in emotional affairs; proneness to manifest all the undesirable qualities of the rebellious child when it pleases (you) to do so." This 'live wire' personality blend is shared by dictator Benito Mussolini and Amelia Earhart.

Also of interest is Sarah Sanders' Prenatal Solar Eclipse in the 2 New North Saros Series which manifested @28Cancer (conjunct her natal Venus) on July 20, 1982. Disturbingly, 2 New North repeats on August 11, 2018 @19Leo very near her natal Sun degree and has been termed by yours truly as The Tower Eclipse (DC horoscope shown) due to its themes of collapsing structures, plans, and lifestyles and the rebuilding that begins once the dust clears (Brady).

An eclipsed Sun in hot August by 'The Tower' Eclipse is quite enough to make me wonder if the White House tenure of press secretary Sarah Sanders will end before 2018 is over or in early 2019.

Now you may wish to check out Nine Things to know about Sarah Huckabee Sanders, White House press secretary.

You sure nailed the timing. We're just a hair over "early 2019." And there she blows.

Thanks Memphis Astrology! it's a wonder Sanders lasted this long isn't it? jc