As you may remember, year 2018 opened its cosmic curtains with a New Moon @26Capricorn54 which perfected very near US natal Pluto (27:33) and echoed RNC 2016 when disruptive Uranian Donald Trump was nominated for the US presidency. For an overview of 2018, here are previous posts showing DC horoscopes of the 2018 Cardinal Ingresses which mark the beginning of each season of the year: Spring Equinox, Summer Solstice, and Autumn Equinox 2018 (with chart details) followed by a view of the Winter Solstice 2018 horoscope which is also set for our nation's capital:

Winter Solstice December 21, 2018 5:22:46 pm est Washington DC; Hour Mars; chart-ruler Moon in Gemini in 12th house of Politics, Karma, and Large Institutions; Mars-Neptune at Midheaven denotes weakness and failure and echoes America's natal Mars-Neptune square of misdirected action and confused motivation; the 'fog of war' may be suggested; evaluating Venus in Scorpio in the 5th house of Speculation and Risk-Taking leads a Locomotive shape of ruthless ambition and her trine to cloudy Neptune suggests what you see penned in the center of the horoscope including monetary fraud and an inflated Treasury, or, inflation used to control a nation's finances. the 2nd house of the National Treasury holds the Solstice's Prenatal Solar Eclipse in the 2 New North Saros Series, aka, The Tower Eclipse which manifests on August 11, 2018 @18Leo41 (DC horoscope shown). The 2NN began in 1928 if that tells us anything: 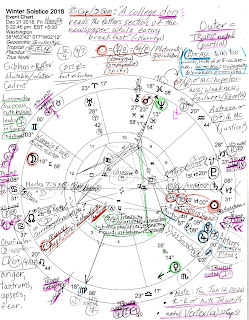 That Tweeter-in-Chief--You Know the One

Please enlarge the image to read my scribbled notes if you wish; highlighted in pink (for bullies like you-know-who) are most of Donald Trump's natal placements, and as you see, his natal Mercury precisely rises in the chart along with transit *Hades and asteroid Hebe (the server; also a Hebrew indicator), both retrograde. Fixed star Alhena ('the wound in Achilles' heel'--bone spurs?; and, to have a mission--to tweet, perchance to tweet alone) also rises, plus, North Node in 1st house is fortuitous and points toward starry Procyon (short-lived opportunities)--perhaps they are our own chances to improve our lot and make karmic progress within this kitten-in-string condition of ours.

A cadent Winter Solstice Sun @00Cap00:00 is in 6th house of Military-Police-Civil-Service (and Health) as are Mercury and Jupiter--conjunct upon malevolent, headstrong, royal star and Watcher of the West, Antares, a red star of war and/or violence. Meanwhile, the Tail of the Dragon (South Node) @26Cap55 is in process of swiping US natal Pluto Rx as it nears Donald Trump's natal Vertex (VX, a point of fated encounter; his @22Cap51) and if you look, bottom right, I've penned a note--that the January 12, 2020 Saturn-Pluto conjunction will 'hit' the natal VX of Mr. Trump. Basically, the Winter Solstice 2018 Nodal axis spotlights America's natal Mercury-Pluto opposition of propaganda, intelligence gathering, political talk of reforms, secrets, orbital weaponry, space exploration, toxins, and self-destructive impulses in business (Munkasey).

As for current nuclear issues, destructive, transforming Pluto (planet of plutonium), is at a critical degree (20Capricorn), power asteroid Toro, often active in nuclear or atomic charts, conjoins South Node, a Saturnian point of separation, and creator-destroyer Siva sits upon the 8th cusp conjunct US natal Pluto. And of course, as noted, there's Trump's natal Vertex in the midst of them all.

Of course, many other chart factors are worth noting for those who dare but I must leave them to you now as the Gemini Moon in 12th house hides away while activating Trump's natal Uranus (his 'guiding planet' in his 10th house of Career and Public Status) and note that the Moon-Uranus combination of energies in Political Astrology indicates excited people, and--an emotionally immature leader who rules by whim.