Historical Horoscope of The Confederate Constitution

"With Malice Toward None"?

Below is a horoscope of the constitutional document that white supremacists prefer. However, this particular Southerner prefers the US Constitution we have, or I should say, are now clinging to.

As it happened, its writing is based on the US Constitution but with a huge, brutal and tragic nod to the continued slavery of African Americans. The Constitution of the Confederate States was adopted in Montgomery, Alabama on March 11, 1861, ratified on March 29, 1861, and became effective on February 22, 1862 as a radical reaction to the November 1860 election of Abraham Lincoln (see Uranus-NN = Mercury and Neptune, lower right). Seven secessionist states were the original signers: South Carolina, Mississippi, Georgia, Florida, Alabama, Texas, and Louisiana; and other states joined the secessionist movement later. As you see, my home state of Georgia, 'the 13th Colony', is on the list of states soon fighting for their slavery-based economic system and convinced that the white race is superior (which I personally consider to be an anti-Biblical mindset since we are All children of our Creator).

A Speculative Hour for the Adoption Horoscope Must Be Found: enter New Moon

In order to set up the Confederate Constitution's adoption chart, the following horoscope is timed by the New Moon of March 11, 1861 @20Pis59 which perfected at 7:51:55 am LMT in the hidden 12th house of Politics and Karma along with a Mercury-Neptune conjunction in secretive Pisces. Naturally, a New Moon represents a new cycle of activity when seeds are planted and ideas are brought forth for future implementation into reality. The Mercury-Neptune duo provides potentials for faulty judgments, bending the truth, and the tendency to withdraw from a painful reality (ex: Lincoln elected). Planets in the 12th house suggest that hidden activities were carried on in private behind locked doors as such planning must always be in order to keep disruptive challenges and the sheriff away.

And note that America continues to suffer under the deceptive, indiscriminate, mis-perceiving, fantasizing Mercury-Neptune square of the white supremacist lurking in the White House and that a horoscope of the first shot of the Civil War reveals the Mercury-Neptune midpoint rising on the 1st shot Ascendant which gives us a revealing picture of Mercury-Neptune = ASC: 'the state of being exploited, deceived, or harmed by others' (Ebertin). Tyl adds: 'potential overreaction to others'. I'd say waging war is a definite overreaction and that massive harm was perpetrated upon our nation by the 'Civil' War and its backers. For details on the exploitation, see the excerpt below the chart.

Note: The Avalon Project has the text of The Constitution of the Confederate States: March 11, 1861. 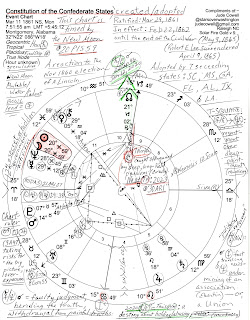 Obviously, the 1st house conjunction of forceful, warring, violent, weapon-loving Mars-Pluto is first to rise in this speculative New Moon horoscope, soon followed by erratic Uranus in process of performing a US Uranus Return to its 1776 position of 8Gem55 (9Gemini's negative expression: 'querulous overconfidence and quixotic notions'--sound like Trump? Perhaps because '9Gemini' is his Prenatal Solar Eclipse degree!).

And with the document's North Node of future direction and destiny in governmental Capricorn, a related post partially describes current conditions which peak on January 12, 2020 and flavor the entire year with its harsh imprint of karmic energies which we're already feeling in 2019: DC Horoscope of the Saturn-Pluto Conjunction 2020.

Also in the 1861 chart, above, note the dynamic T-Square between Venus-Saturn and rebellious Uranus = 'sudden separation' (Ebertin). Noel Tyl adds: 'split-off affairs' and/or 'boredom with the past'. Descriptive, I would say! As is a midpoint picture involving the radical reformers pair of Uranus-North-Node for it conjuncts Mercury and Neptune thus creating potentials for: 'impetuousness, meeting with people off the beaten path' (Tyl); 'quick comprehension, criticizing others, fast-traveling news, people who are easily impressed, being deceived', and/or 'the undermining of an association' (ex: undermining a Union).

Now here's an excerpt from a previous SO'W post (with its link added below) concerning intentions of 19th-century Southerners (and slave-owning Northerners) and the machinations of wealthy warmongers who shamelessly funded and manipulated North and South into killing their own brothers and cousins--for social meddlers and anti-civilization secret societies, then as now, the destruction of families was and is a welcomed side effect:

According to Nicholas Hagger's research (The Secret History of the West), the Priory of Sion wanted America back from the Templars so the Rothschilds planned an American civil war with the North a Sionist British colony, annexed to Canada and controlled by Lionel Rothschild, and the Templar South to be given to Napoleon III of France and controlled by James Rothschild.

To persuade the South to secede from the union, Illuminized Sionist-Rosicrucian Freemasons used the Knights of the Golden Circle (one member: John Wilkes Booth) which had been formed in 1854 by George Bickley with the objective of spreading racial tension; its military arm was the Ku Klux Klan. Meanwhile, Jesse James stole gold from banks and buried it to fund the war (nearly $7 billion!)

The states that seceded would be united in the Confederate States of America with each eventually becoming like an independent country. Abraham Lincoln (inaugurated March 4, 1861) told the American people that, "combinations too powerful to be suppressed by the ordinary machinery of peacetime government had assumed control of various southern states."

So for illumination concerning the plan that under-girds today's machinations and 'craziness' you may dare consider Civil War general Albert Pike's letter to Mazzini (founder of the Sicilian mafia), what we may call "An Unsealed Letter" as per the Sabian Symbol for '30 Leo' which is the rounded-up degree and symbol for the natal Ascendant of Donald Trump. The symbol's keyword is "CONFIDENCE"; its positive expression: "exceptional skill in winning and holding the respect of everybody" - a big oops for an unpopular Trump; negative expression: "a genius for indiscreetness" (Jones). Now that sounds like the very stable genius now in process of sabotaging the United States of America. Can we agree?

Thank you for the history lesson. As African American woman,and a veteran watching the antics of the orange buffoon incite and promote white supremacy is appalling, frustrating and extremely painful.

As long as I can remember, I have felt like a second citizen but thanks to my spiritual quest, love of astrology, and people like you, I have been able to gain a more expansive view of life on this planet. I came here to have this incredible experience and dammit, as god is my witness...I shall succeed! (just a little drama)

Fantastic attitude Linda I like the way you think! Jude