If you're curious, check out this Historic Footage: JFK Inauguration 1961 (7m23s). And below is the 1961 Inauguration Horoscope with John F. Kennedy's natal chart outside it (contacts between the planets are circled--1917 vs 1961). As usual, my messy notes are scribbled upon the charts and there are five primary contacts of note from the Inauguration 1961 chart to his natal planets--two are notable since they involve powerful Pluto but JFK's natal Saturn and Uranus are also activated by transit, plus, other transits and progressions occur as well, both positive and negative but these five are the ones that 'pop out' at me in this inaugural horoscope although you'll spy others, I'm certain, especially if you look at *future transits to the 1961 Inauguration Horoscope:

1. 1961 Pluto square natal Sun denotes potentials for a need to overcome those with more power and influence; loss-of-power issues; threats received; integrity challenged; benefits are gained but with much frustration and possible setbacks; determination is tested; achievement of ambitions may be delayed or transformed; willpower may be paralyzed temporarily.

2. 1961 Mars Rx conjunct natal Pluto indicates a period when karma comes into play as energies are intense, purposeful, and require patience and direct channeling for best results; male relationships are prominent and one male in particular (brother Bobbie, one assumes--see Mercury @10AQ03 in 10th house with the presidential Sun) may be a guiding or a driving force; negative conditions can involve provocation, blow-ups, jealousy, and/or revenge, plus, investing assets and deep research are on the menu.

3. 1961 Uranus Rx in Leo opposes natal Uranus at station in Aquarius three times from September 1960 through July 1961--this is the "mid-life crisis" transit of disruption when one may behave uncharacteristically and generational clashes occur with 'no meeting of the minds'; however, well-handled changes are beneficial and are not too disruptive, with moving forward the objective;

4. 1961 Saturn @21Cap54 opposes natal Saturn three times from March 1961 through December 1961 indicating a harvesting time when rewards may be reaped if hard work has been done in the past and responsibilities have been met; past mistakes, if any, need correcting, and legalities may temporarily get in the way of progress.

5. 1961 Venus square natal Venus suggests potentials for imperfect timing; wrong or unpleasant settings or environments; something amiss but not entirely useless; values are blocked in some way or are not quite appropriate; or, things don't work out as they should but they'll 'have to do'. 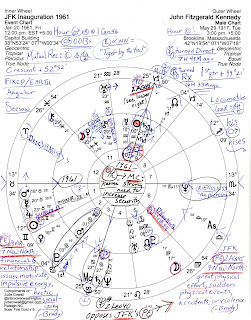 Note that both the Prenatal Solar Eclipse Saros Series ('PE') for 1961 and for JFK's birth and their themes are listed on the chart, lower left (1961) and lower right (1917). And if you're looking for any hints of the tragedy to come, may I suggest the usual suspects--Mars (to natal Pluto), Saturn (conjunct 1961 IC of Endings), Uranus (oppo natal Uranus, a time of instability and perhaps unusual characters in the environment--plus, 1961 Uranus is apex in a YOD crisis pattern suggesting Jack Kennedy's 'special task' of moving our nation toward a new direction which quite a few folks took great exception to); then there's hidden hand Pluto blocking his natal Sun (goals) while Venus, possibly scorned, adds her hints of jealousy and revenge.

In addition, we must include masking, deceptive, shady Neptune--both 1961 Neptune in intense Scorpio (angular and conjunct natal Eros, the piercing) and JFK's 1917 Neptune in Leo opposing his PE in the 9 New North Series.

*Two transits I'll mention here between the 1961 Inauguration Horoscope and the JFK Assassination Horoscope of November 22, 1963: in progress was a Nodal Half-Return across the Cancer-Capricorn security axis (see my scribble in the center of the bi-wheel concerning Sun-Saturn = MC) suggesting broken relationships, and transit Uranus which had met and crossed the 1961 Pluto-North-Node conjunction (the "tiger by the tail" duo) and thereby formed a midpoint picture of: "big upsets within the community; and, emotional suffering through separation" (Ebertin). Yes. That.