May 8, 2020: Below is a dual image of the Department of Justice ('DOJ') dedication ceremony horoscope accurately timed by the Masonic dedication ceremony presided over by President Franklin D. Roosevelt, elected hour set for 3:00 pm est on October 25, 1934 (lower left chart). Upper right is the 1934 dedication horoscope progressed (day for a year) to the moment of the DOJ Progressed ('SP') Full Moon @28Can39 opposing DOJ SP Sun @28Cap39. As you know, this is the Cancer-Capricorn security-ambition/home vs career polarity.

Now if it's true that an SP Full Moon of person or entity represents how far such person or entity can reach into the world, then symbolically August 2020 is it for the US Justice Department. Not that the DOJ will cease to exist but that its influence and power in society will peak then begin to fade from here on out. Of course, much depends on whether the imperatives and objectives of the previous SP New Moon (exact March 15, 2006 @13Cap57 opposing US natal Sun, the leader--then representing George W. Bush) have been successfully fulfilled. If not, the culminating SP Full Moon marks an end of those efforts and a decision or plan to adopt a new direction and new objectives. 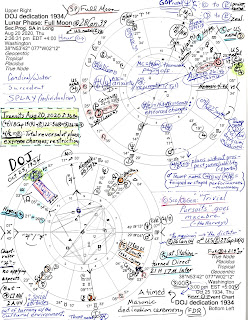 In 2006, perhaps the related event that stands out is the Bush administration's controversial, unprecedented sudden dismissal of 7 US attorneys perpetrated on December 7, 2006. Personally I remember how shocking and disorienting this was for our country and for the department itself. And it's possible that with corrupt Attorney General William Barr now protecting corrupt Donald Trump, more sudden dismissals of US attorneys (and other separative, disruptive activities) are on Barr's DOJ agenda in 2020, the year cosmically imprinted upon by the symbolic SP Full Moon of the DOJ across the Cancer-Capricorn axis. Of course, calls for Barr to step down are being more or less ignored by these men with bad intentions against our nation so we'll have to see how that goes.

A difference is that at the 2006 SP New Moon, SP Neptune in Virgo represented 'high level intellectuals and planners who acted as a supportive resource' for the DOJ, thanks to their beneficial trine relationship. Obviously, such support is sorely needed now and many have stepped forward already, some calling for Barr to step down, as noted. See DOJ Alumni Call for AG Barr to resign. Thing is, the SP New Moon horoscope shows SP Neptune Rx at SP IC (undermining), Uranus-Neptune = ASC (anxiety) = US natal Jupiter (rejuvenation!). Plus, there are unfortunate signs of underworld connections (SP Venus-Pluto opposition) which is what we notice as we watch Trump, Barr, and their comrades in action - plundering the resources of the USA and undermining our systems and institutions such as the DOJ, legal system, and Congress. Meanwhile, transit Pluto in Capricorn helps with their plan for structural collapse - as do the continuing influences of the 2018 Tower Eclipse.


(For more details see Current Conditions and The Tower Eclipse.)

Yet hope springs eternal! So maybe August 2020 or thereabouts will miraculously bring Bill Barr's resignation and thus a more traditional path for the DOJ which could qualify as a 'new direction' compared with the off-kilter trail of stones figurehead Trump has embarked us upon. And/or a Trump resignation would happily cause dancing in the streets, now wouldn't it?

However, other than America's return to a more traditional path, (and I don't care to type it but) the events and projects that began around the destabilizing time of the DOJ's SP New Moon in late 2006 into 2007 seem to be successfully culminating in or about August 2020 as timed by the department's SP Full Moon perfecting under the purview of AG Bill Barr on behalf of con man Donald Trump - and their idea of a 'new direction' is so far proving to be a tragic course for the disenfranchised American people, a course leading to the tyranny of plutocracy, monarchy, dictatorship.

Additional Chart Notes include but are not limited to:


Sun-to-Pluto and Moon-to-Pluto implications in the SP Full Moon horoscope: one reveals power needs and a need to grasp control, plus, new perspectives being revealed (Sun), the other suggesting zeal and intense self-application (Moon). Also in the 1934 chart is the DOJ's Saturn Stationing in Aquarius (in 12th house of Politics, Large Institutions, Self-Undoing, Karma) conjoining health asteroid Hygeia which to me may symbolize our current crisis conditions in which health issues (Hygeia) are used by authorities (Saturn) to stop the functioning (Saturn) of society - all very Saturnian and karmic.

At SP Midheaven ('MC') is the radical Uranus-North-Node midpoint suggesting teamwork that pays off (as it often does) in career efforts (MC); the SP Uranus-Pluto midpoint conjuncts DOJ 1934 Moon denoting enforced changes upon the populace. That the SP Full Moon chart shows SP Neptune at IC depicts the current instability at the foundation of the DOJ; and penned on the chart is SP Mars = SP Jupiter-Neptune, the speculation-inflation-grand-scheme duo suggesting that someone has laid plans without prospect of coming to fruition but who has an urge for great achievements. Hopefully, 'spoiled plans' and 'stymied achievements' describe the corrupt mob-like activities of Barr, Trump, and comrades, both foreign and domestic. Meanwhile, Trump's natal Jupiter @18Libra conjoins SP Full Moon Mars so we find him playing at the POTUS role via feigned and staged performances. But you already know this, don't you?

Highlighted in green (left middle), you see the current heavyweight trio of transiting Jupiter-Pluto-Saturn (18 to 27 Capricorn) all retrograde and forming a midpoint picture of 'total reversal of plans, extreme changes and reforms, ideas transformed into reality', and/or 'restriction'. Restriction in August tallies with the themes of the 4 North 2020 Summer Solstice Eclipse under which the DOJ SP Full Moon will become exact. 'Misjudgment of strength or the situation', plus, 'events that block' and 'separation and illusion' are also themes of 4 North solar eclipses (Brady).

Finally, a note about a prominent, angular (chart not shown) August 20, 2020 transit (2:36:31 pm edt Washington DC) and that's an exact opposition between Moon (20Virgo) and Neptune (20Pisces) which reveals deceitful practices and those who scheme underhandedly against their opponents. Perhaps this relates on a deep level to the fact that the SP Full Moon's MC (@14Pisces29) sports the SP Uranus-North-Node midpoint (teamwork, as noted) but also the natal Neptune of the Republican Party (1854) with their nebulous Neptune's Sabian Symbol: "A Woman in FOX Fur." Teamwork!

Phone call of Barack Obama concerned about the rule of law because of Bill Barr's dismissal of perjury charges against Michael Flynn (which Flynn plead guilty to), story vetted and released by --